BALTIMORE, MD (August 24, 2020) – A new study from the University of Maryland School of Medicine (UMSOM) has found wide variations throughout the United States in the way hospitals ensure that premature or low birth weight infants can breathe safely in a car seat before discharging them. The study, published this month in the journal Pediatrics, found that the same infant who passes a screening in one hospital’s newborn nursery (NBN) may fail in similar facilities at another hospital’s nursery. The authors concluded that “further guidance on screening practices and failure criteria is needed to inform future practice and policy” in order to better protect these vulnerable newborns.

“Proper placement of an infant in their car seat can be a challenge, but it’s important to get it right. Research has shown that 63 percent of infant sleep-related deaths that occur in sitting devices are in car seats,” said the study lead author, Natalie L. Davis, MD, MMSc, Associate Professor of Pediatrics at UMSOM and a Neonatologist at the University of Maryland Children’s Hospital.

The American Academy of Pediatrics (AAP) recommends a car seat tolerance screen (CSTS) for all premature newborns in the U.S. in order to identify any heart or breathing risks that could make use of a car seat unsafe in these babies whose lungs are not fully developed.

“The infants are placed in a car seat with a breathing and heart rate monitor for an hour-and-a-half to two hours to see if they are breathing effectively,” Dr. Davis said. “The problem is that the AAP recommendations do not have specific guidelines on what to test for and how to test, and do not provide much guidance on what doctors should do if infants fail these tests,” said Dr. Davis.

Hospitalized newborns are placed flat on their backs as part of national “Back-to-Sleep” measures to prevent sudden infant death syndrome (SIDS). “In the hospital, we use monitors on at-risk premature babies, and we do not send them home until they have established normal vital signs in their crib,” said Dr. Davis. When at-risk infants are placed in a car seat for the ride home from the hospital, however, the semi-upright sitting position can pose breathing obstacles that may not be obvious in the flat-back position.

To gain a snapshot of CSTS practices today, the researchers conducted a survey across 35 states using a network of hospitals that participate in an outcomes research network. Of the 84 newborn nurseries surveyed, 90.5 percent reported performing a pre-discharge CSTS. Dr. Davis and her colleagues found, however, that newborn nurseries varied in how they selected newborns to be screened and what parameters they used to identify failure on a test. They also had inconsistent practices in how they dealt with a screening failure in terms of recommendations for parents to use special infant car beds instead of car seats and in making referrals to specialists for follow-up monitoring.

Most NBNs surveyed said they did repeat a CSTS after an initial failure, but the timing ranged from an immediate retest, to a minimum seven-day observation before retesting.

In a previous study published earlier this year in the journal Academic Pediatrics, Dr. Davis and her colleagues also found similar inconsistencies in the use of CSTS among infants discharged from neonatal intensive care units in hospitals throughout the country.

Dr. Davis said the findings from both studies highlight the need for more specific recommendations from the AAP to define failure criteria on these tests and recommended steps for follow-up if an infant fails. While she acknowledged that limited data have made it difficult for the AAP to establish evidence-based guidelines, having nationally consistent recommendations could help improve the collection of data and lead to refinement of the advice if needed.

“If we are all doing something similar,” she said, “then we can consistently see if we are actually catching the babies who are at risk and take the appropriate steps we need to modify from there.”

Two areas that can be improved immediately:

1. Parents and caregivers can be better educated on the proper placement and fit of an infant in the car seat through the use of child passenger safety technicians at the hospital.

2. Newborn nurseries should arrange for appropriate post-discharge follow-up, particularly if an infant is sent home in a car bed. Parents will need to know when it is safe to transition their baby to an upright infant car seat.

“This research clearly establishes a need for national standards to ensure that hospitals are providing consistent care to neonates,” said E. Albert Reece, MD, PhD, MBA, a specialist in maternal-fetal medicine, who is Executive Vice President for Medical Affairs, UM Baltimore, and the John Z. and Akiko K. Bowers Distinguished Professor and Dean, University of Maryland School of Medicine. “It also points to the need for better data to help inform our medical societies when they make these public health recommendations.”

About the University of Maryland School of Medicine

About the University of Maryland Children’s Hospital

The University of Maryland Children’s Hospital at the University of Maryland Medical Center is recognized throughout Maryland and the mid-Atlantic region as a resource for critically and chronically ill children. UMCH physicians and staff excel in combining state-of-the-art medicine with family-centered care. More than 100 physicians specialize in understanding how to treat conditions and diseases in children, including congenital heart conditions, asthma, epilepsy and gastrointestinal disorders. The Drs. Rouben and Violet Jiji Neonatal Intensive Care Unit (NICU) provides the highest level of care to the tiniest newborns. To learn more about the University of Maryland Children’s Hospital, please visit http://umm.edu/childrens.

Disclaimer: AAAS and EurekAlert! are not responsible for the accuracy of news releases posted to EurekAlert! by contributing institutions or for the use of any information through the EurekAlert system.

F1 to clamp down on "reverse engineering" of rival cars - F1

Tue Aug 25 , 2020
The FIA has promised Formula 1 teams that it will clamp down on the use of photography and other techniques used to “reverse engineer” copies of rival cars. The formal commitment is a follow-up to comments made in an interview last weekend by FIA head of single-seater technical matters Nikolas […] 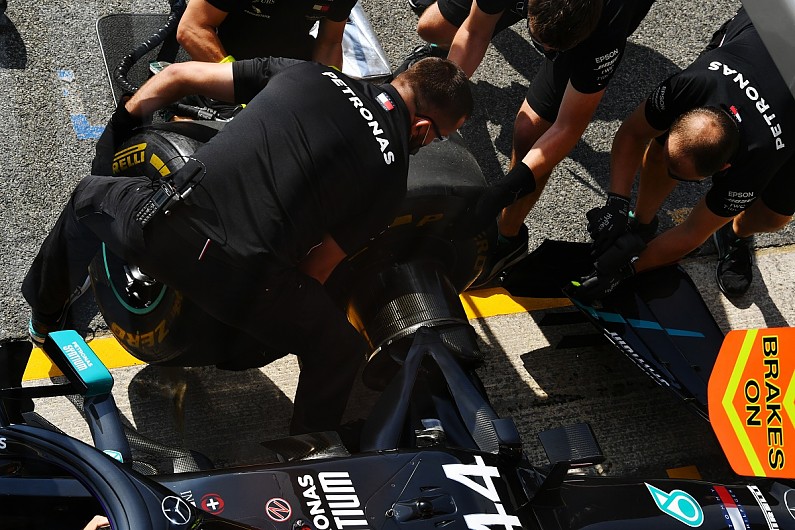