One of the most important pieces of information to have on hand when purchasing a vehicle — especially a used one — is its actual value when conducting both a private sale and a dealer-authorised sale. Knowing a car’s value ahead of time allows buyers to get a great and fair deal on a car, while sellers can use a vehicle’s value to price the sale fairly and attract the largest number of potential buyers.

At What’s My Car Worth? we aim to provide this service as conveniently as possible. Using a car’s number plate and basic information about its features and mileage, we can calculate with a good degree of accuracy what a car is worth when buying it from a dealer, or when conducting a private sale or purchase away from traditional dealer lots. Our service is quick, efficient and free, and it’s the best way to make sure that a car is not overpriced, or that the car’s price perfectly reflects its previous use and its included features. There are some distinct benefits to researching a used car’s value for both buyers and sellers that can actually make the difference between a successful sale and a long, fruitless string of classified ads that goes unanswered for weeks at a time. Our free car valuations are now provided by We Value It.

Obtaining the value of a used automobile online before heading to a dealer lot is the best way to ensure that a fair deal is achieved during the buying process. Dealers, especially those who sell used cars, are known for significantly marking up the motors on their lot and they often add hundreds or even thousands to a used vehicle’s actual value when selling it to typical buyers. This is typically done only to boost their own profit and the financial viability of the dealership, and it’s not necessarily a statement of the car’s actual value or worth.

Keeping in mind the actual value of a car when shopping at a used vehicle dealer is the best way to make a strong purchase and hold the dealer accountable for their markup. In many cases, this is the key to negotiating a lower price that is much closer to the actual value of the car. It’s important to remember that most car valuations are produced in both dealer-priced versions and values that reflected the car’s price in a private sale. In most cases, the value produced for a dealer sale already includes a healthy markup over the vehicle’s real price. Anything above and beyond this should be considered sheer profit, bad pricing, and an attempt to rip buyers off as they find their next vehicle.

Establishing a car’s value is most often associated with actually buying a vehicle, but that’s actually not the only place where valuation tools come in quite handy. Indeed, the tools provided here on What’s My Car Worth? are actually incredibly useful for private vehicle sellers and those who are trading in their car at a nearby dealer lot.

All too often, private used car sellers assume that they know the price of their vehicle in the current market. That assumption is a dangerous thing to make, as it often leads to an undervalued vehicle that will get the seller less money than they actually deserve, given the condition and year of their used car. In other cases, assuming the value of a vehicle without first checking its value online can mean offering a car at an overpriced level. That certainly won’t attract any buyers to the classified ad, and a high price can make it much harder to close any sale. At the very least, sellers will be faced with tough questions and negotiation from their prospective buyers.

On dealer lots, it’s important to know the value of a vehicle when “selling” it to the dealer in exchange for a new car. Remember that the trade-in value of a vehicle is often lowballed by dealers in order to make the largest amount of money on a new car sale, and they’ll give a very low estimate so that buyers have to finance more of their new vehicle’s cost. That’s not a fair business practise, and it can be avoided by having an idea of a vehicle’s going rate in the marketplace before even mentioning the word “partex” to a dealer.

The largest automobile auctions company in the world, Manheim, are predicting that the price of used cars will fall during the summer, as more used vehicles make their way to market.
Read More »

Mon May 11 , 2020
Imagine yourself after a hot day of driving, hiking and setting up camp… you have trekked through desert dust and your muscles are tired and sore. What better way is there to wash and scrub up than under an invigorating hot shower. But you’re in the most remote part of […] 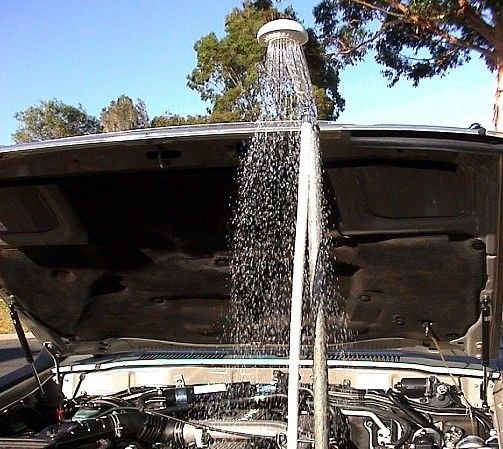