Image of the car Royce crashed into from insurance company paperwork. Supplied by the author

A car accident in 2018 sent journalist and formerly uninsured motorist Royce Kurmelovs headfirst into a painful and personal journey into Australia’s relationship with debt. In this extract from his new book Just Money, Kurmelovs reflects on an economic generation gap… as he breaks the news to his mother.

It was the week before Mothers’ Day, a chilly Sunday morning in autumn, and I had caught the train out to meet Mum for lunch. The Italian continental deli was mostly empty and as I was the first to arrive I picked a table at the centre of the dining area. The coffee was good.

When I broke the news, the woman sitting opposite me reacted in the way I imagine all mothers do when their child tells them about a recent arrest and pending prison sentence. First her eyes widened as her anxiety flared. Then they narrowed into a look of pity. It was a look I don’t think I’ll ever forget.

As migrants, or the children of migrants, my family’s various branches of my family tree have largely inherited two competing attitudes to money. The entire clan had turned up in the 1960s with more or less nothing. That experience had marked them in their own ways. None would ever admit it, but my aunts, uncles and parents live with an instinctual fear of going back to nothing. It was a latent attitude my sister and I inherited and was, at times, both motivating or suffocating.

My parents’ other defining quality was an unshakable belief in the value of education as a path to upward social mobility. My father had been a concreter and then an earthmover. My parents both agreed it was better, and certainly more lucrative, to work with your head and not your hands. All their life experience seemed only to reinforce this fact. It was a law of nature, as basic and unyielding as gravity. Education guaranteed a better life. More precisely, it guaranteed money. With these things, one generation went on to do better than the last.

For years my sister and I had been trying to explain how this wasn’t necessarily true. Every message the world had sent us during our first two decades of life only reinforced the view that nothing could be guaranteed and that we should expect to do more with less. Terms like “casualization” and “zero-hours contract” were just facts of our environment.

While we were living the consequences, we didn’t have any grasp on why this was the case, and lacked the detail required to piece events together in one clear, coherent narrative. We knew everything was going to take longer for us to achieve than it had for the generation before us. We understood we were going to have to work harder than our parents, in a more unstable environment, and success was a gamble. Finding a job was harder. Hours were fewer. Housing cost more. So did kids. Some of our friends had these things. Some of our friends had travelled the world. Others had not.

Then there was debt. Debt was the Big Bad of our generation, that thing always hovering at the farthest edge of our awareness. And if debt was bad, to be a debtor was worse. Debt snuffed out possibility by tying you to any number of reduced futures. It meant having to stay in a shitty job as long as it took to pay off what you owed. Handled wrong, debt could even mean poverty. Debt made you powerless and submissive. So to be in debt was shameful.

Our parents understood this to a degree. They shared our suspicion that the world as they knew it no longer worked as it should, but like us they couldn’t explain why. To think about it caused only worry, so instead they pushed the anxiety to one side, choosing to believe that bad things only happened to other people. In their minds, their kids – armed with university parchments – were different. We were destined for the good life.

As a family, we have had to confront the tension that exists between individual agency and the structural reality that shapes the choices available to each of us – and we’re not alone. The rest of the country has also begun to recognise that something has changed, and it can now be measured by the statistics. In 2014, Danielle Wood of the Grattan Institute began to track the slow breakdown of the intergenerational bargain that forms the basis for the Australian social compact. This was the implicit promise that the next generation would do better than the last, allowing it, in turn, to take care of the older generation when they can no longer work.

In 2014, the first time Wood released her report, titled The Wealth of Generations, she found people below the age of 40 were not experiencing the same rise in living standards as their parents and grandparents did. Not long before the release of the follow-up report in 2019, I called Wood looking for quotes for a feature I was working on. She was in the middle of putting together a speech about intergenerational wealth when she picked up the phone.

“It’s crazy,” she said. “What we can see is that younger people, given stagnant incomes, are spending more on what we call essential goods – things like housing and food – and less on discretionary items, such as recreation, travel and clothing.

“Millennials just aren’t experiencing the same growth in living standards that we’ve come to expect from previous generations. We’ve come to expect that each generation will be better off than the one before. Older households have been accumulating wealth very rapidly in the past 15 years off house price growth.”

When the updated analysis was published in August 2019, Wood’s conclusions were blunt. Over the past 12 years, households headed by someone aged 65‒74, had held an average equivalised wealth of $1 million. For those in their late twenties and early thirties nothing had changed, with the figure static at around $200,000. Young people, it should surprise no-one, were working to survive, instead of working to live. Our grandparents, and even our parents to a degree, had benefited from opportunities throughout their lifetimes that were not available to us.

“The conditions that precipitated the rapid growth in wealth for older Australians are unlikely to be repeated,” Woods wrote in her report.

Hearing the news Mum paused for a while. “How much?” she asked, all of a sudden.

I refused to say. Not until I thought she could take it.

There was another pause.

“Are you doing okay?” she asked.

“Do I look like I’m doing okay?” I smiled at her once more and did my best to project ease.

Eventually she agreed it was probably best I didn’t tell her anything else. So long as I was okay, she said, she didn’t need to know. Her mouth moved to one side as she grew lost in thought, before sighing heavily. “Well, fuck,” she said.

There is something unnerving about a gentle 57-year-old woman saying the word “fuck.” Personally, I swear like I have a legal right to it. My mother reserves such language solely for the government of the day, and her husband.

As we talked it out, I had an acute awareness that it wasn’t the first time in human history this exact conversation had taken place. For as long as there have been societies, sons and daughters have been lying to their parents or breaking bad news to their mothers about their circumstances. What amounted to one uncomfortable hour for me, was part of a much longer conversation that had been going on centuries.

Just Money: Misadventures in the Great Australian Debt Trap is in bookstores from September 1, or online here

Wed Sep 9 , 2020
Jose Alfaro (left) and Manuel Peña-Morros (right) ride down a newly installed cycling lane on … [+] Insurgentes Avenue in Mexico City. Nathaniel Parish Flannery With the sun barely starting to illuminate the city on a quiet Saturday morning, I join a small group of cyclists led by Alejandro Diaz, […] 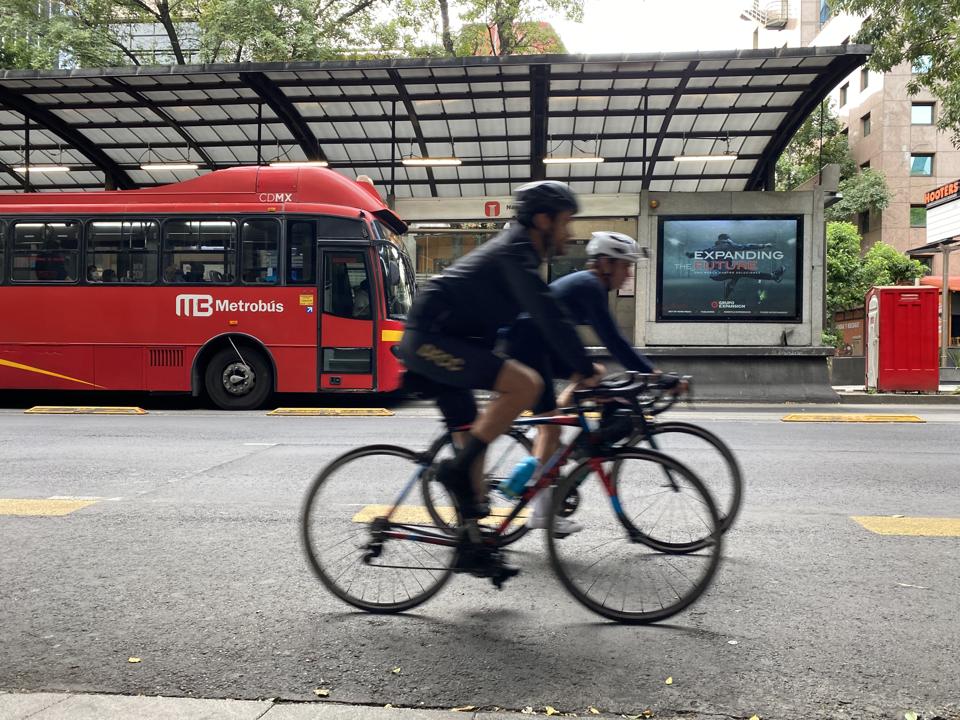