Chalk it up to coincidence that a California company called HAAH Automotive Holdings announced it would build Chery’s Exceed SUVs, under a new brand name, from knock-down kits in the U.S., and that Geely will merge with the Volvo brand, weeks after President Trump announced Phase One of a trade deal with China, and just as the Wuhan-based 2019 nCoV—you know it better as coronavirus—expanded as a worldwide health epidemic.

HAAH, Chery, Geely, Volvo, and the nascent Geely North American brand, Lynk & Co., certainly want none of this. They just want to sell cars from the world’s biggest automotive market to the second-biggest automotive market, especially as sales have seriously slipped from China’s peak of 24.72 million in calendar 2017. China’s 2019 passenger car sales totaled 21.44 million last year, off 9.6 percent from 2018, according to statista.com, while U.S. sales in ’19 totaled 17.11 million, off just 1.2 percent from ’18, Automotive News reports, marking the fourth year of 17-plus-million sales here.

The coronavirus potentially could take a bigger toll in both the U.S. and China in 2020, with delayed parts and supplies shipments from China already affecting Hyundai in South Korea, and General Motors in both South Korea and the U.S. Tata Motors warns that Jaguar Land Rover production could come to a stop within two weeks if the supply of Chinese parts remains halted.

The U.S.-China trade war is an even bigger unknown. There was very little detail in President Trump’s Phase One announcement in January, and none of it related to auto sales and production. While the Chinese automakers most aggressive with their Western export programs have delayed their plans as a result of the Trump administration’s trade policies, the potential trade protectionism is one of the rare political positions that unite both sides of the aisle on Capitol Hill. There is no guarantee that if the Democratic candidate takes the White House next January that importing cars will become any easier for Chinese automakers.

Best-case scenario target date for U.S. import seems to be late 2021 or early 2022. By then, we’ll have a much better notion of our policy toward trade with China, whether President Trump or his Democratic opponent occupies the White House.

This new marque just announced last week immediately takes the lead in the race to become the first Chinese-sourced brand sold in the U.S. and Canada. The parent automaker is Chinese giant Chery Automobile, which also builds cars and SUVs under the Arrizo and Tiggo nameplates. Chery’s semi-premium Buick is the Exeed brand, which will serve as the basis for North America’s Vantas. Under the agreement announced by distributor HAAH Automotive Holdings, Vantas plans to launch with two SUVs in late 2021 or early 2022, rebadged from Exeed models and tweaked to meet North American standards and tastes.

“We, like our dealers, feel the discussion [toward Phase Two of the US-China trade talks] is moving in the same direction as Phase One. We believe cooler heads will prevail and we’ll have a deal,” Duke Hale, chairman and CEO of HAAH Automotive Holdings tells AUTOMOBILE. If not, “It’s not going to change whether we’re coming to the U.S. market. That’s not going to stop us.”

“All vehicles sold in the U.S. and Canada will be assembled in American plants bringing new jobs to America,” HAAH states in a release. Hale expects ultimately a four-to-five-model lineup, with the third Vantas model arriving about 12 months after the first two.

Dealerships will be more like Costco than Taj Mahals, with Apple Store-like “product specialists” instead of traditional salespeople. HAAH’s plan is for about 240 dealerships at launch, with standalone showrooms, though likely sharing service/parts facilities with other brands a megadealers’ auto malls. HAAH also plans Vantas satellite showrooms in shopping malls, and maybe even Las Vegas casinos (where Hale was attending the National Auto Dealers Association annual convention when we spoke). Each dealership will get a big physical territory, Hale says, and ultimately will total 320 or 330 in the U.S.

“We’re looking at an online platform,” with customers able to buy Vantases without ever setting foot in a showroom. The first two Vantas SUVs will come fully equipped, with no options, and at no-haggle sticker prices.

Geely announced earlier in February a “merger” with Volvo, the Gothenburg, Sweden-based company that the Chinese giant purchased from Ford Motor Company in 2010. This might come as a surprise to those of us who thought they were joined at the hip already, with Volvo serving as Geely’s successful premium international brand.

The new merger is mostly about parts and components sharing between Geely, Volvo, and the four-year-old brand designed to slot between the two in price and prestige, Lynk & Co. The company launched the Lynk & Co 01, a small SUV on the same Compact Modular Architecture as the Volvo XC40, in China in December 2017, and the brand was expected to import cars into the U.S. within a couple of years, though it’s clear Trump’s tariff policy cooled Geely’s plans.

Those plans inspired HAAH’s plans for Vantas, which involve a one-spec fully equipped model offered with eight color choices, sold at no-haggle sticker prices. Unlike Vantas, Lynk & Co has the advantage of a Volvo dealer network that could launch the marque with just one model at a time. That advantage gives the new brand the ability to break traditional U.S. dealership rules, while remaining safely within the highly regulated and protected dealer franchise system.

Alain Visser, Lynk & Co’s senior vice president, outlined Geely’s strategy at the Automotive News Retail Forum in February 2017. The Lynk 01 was designed around technology, always connected to a cloud computing platform, Visser told Automotive News, and would target young buyers via a subscription model, “which differs from a lease because it requires no down payment.” Lynk & Co would advertise only the subscription price, AN says, though the 01 could be purchased or leased traditionally.

Plans called for the Lynks to be sold from small storefronts in urban areas to start, including San Francisco, Miami, New York, Boston, and Chicago, and expanding to pop-up stores “and maybe even space in urban shopping malls.” The CUVs would be delivered to the buyer’s home, and be picked up and returned for service, AN reported.

About half a year after Visser’s Automotive News Retail Forum presentation, Ford Motor Company challenged Geely’s application for a Lynk & Co trademark. So when will Lynk & Co, under that name or a new one, come to the North American market? Geely doesn’t yet have an external public relations office in the U.S., although it operates a design center in Southern California, as well as in Shanghai; Barcelona; Gothenburg, Sweden; and Coventry, England, under executive vice president of design Peter Horbury.

I asked a Geely public relations executive based in China, for details on when Lynk & Co will come to the U.S. He responded, “Lynk & Co will launch into Europe in mid-2020, the U.S. will follow in due course.”

Guangzhou Automobile Group’s GAC Motors made quite a splash in the last two January North American International Auto Shows in Detroit, with a credible display of production models and concepts. One of the production models, the GAC GS8, is a three-row SUV vehicle the automaker said in January 2018 that it planned to import to the U.S. in late 2019.

By the January 2019 NAIAS, GAC told the automotive press that the GS8’s U.S. launch was delayed to the first half of 2020. It also planned to announce North American dealerships following the late January National Auto Dealers Association (NADA) annual convention in San Francisco. In a press release afterward, GAC executive vice president said the company hosted more than 80 dealers at the convention and received “positive feedback” from dealers and partners, but he did not say whether any of the retailers had signed on.

Since then, GAC has gone dark. It is no longer signed with the Metro Detroit public relations firm that organized the 2018 and ’19 NAIAS press conferences. Michael Dunne, whose ZoZo Go consultancy firm specializes in the Chinese automotive market and its plans for export, says the automaker maintains research and development facilities in Michigan and California.

“GAC is in a holding pattern,” regarding North America, he says.

Dunne notes that Karma Automotive, whose Revero GT extended-range EV is derived from the defunct Fisker Karma and who we extensively profiled, is owned by Chinese auto supplier Wanxiang Group, and is assembling cars already in a California plant.

“Great Wall could start by 2022,” Dunne adds. Though “famous for SUV and pickup manufacturing” according to Great Wall Motors’ (GWM) website, it has said little about ambitions for entering the North American market. On Tuesday, GWM announced it had entered into an agreement to purchase General Motors’ Thailand Rayong manufacturing facility, where the U.S. automaker has assembled the Chevrolet Colorado. Great Wall recently announced plans to enter the Indian market, and already sells vehicles in Russia, South Africa, and Australia.

Finally, Zotye, like Chery, is associated with HAAH Automotive Holdings, Dunne says, and should likewise be considered a frontrunner in the rush to import to North America. In September 2017, Zotye and the Ford Motor Company announced a joint venture to develop and build EVs in China.

Sun Apr 26 , 2020
Wind for Schools worked with several teachers who expressed interest in using bicycle generators to teach their students some fundamental concepts of energy and basic mechanical, engineering, and electrical principles. With this project we worked with K-12 and college students to organize hands-on design and construction of bike generators. We […] 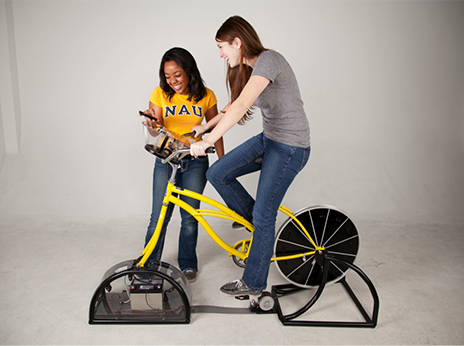