In 1961, a boxy sedan called the Ford Cortina kicked off Thailand’s auto industry with local workers assembling the cars using parts shipped from Britain. A few years later, Toyota Motor Corp. and Nissan Motor Co. set up factories, launching a decades-long expansion that made the country Asia’s third-largest — and the world’s No. 10 — auto manufacturer.

That position earned Thailand the moniker “the Detroit of Asia,” and with it came a comprehensive supply chain to feed the production of traditional internal combustion engines. Over the space of 50 years, Thailand went from knock-down assembly — where an entire vehicle is put together from an imported kit — to hosting end-to-end manufacturing at 18 plants across the country with thousands of parts suppliers.

Now that electric vehicles are starting to replace combustion engines, the country is again turning to overseas partners to keep its position in the global industry. Whereas Ford Motor Co. of the US and Japan’s Toyota were early drivers of the sector in the mid-20th century, new names like Taiwan’s Foxconn Technology Group as well as China’s BYD Co. and Contemporary Amperex Technology Co. (CATL) are now keen to help.

A cornerstone of the government’s policy is its 30:30 goal — 30% of vehicles produced to be electric by 2030. It has a two-stage plan to achieve this: first, lure consumers to switch to EVs no matter the origin, and then tip the scales in favor of domestic models.

Subsidies in place for purchases are key to driving demand initially. A reduction in import duties and excise taxes will make all EVs more competitive than their combustion counterparts. But from 2024, those incentives will be reduced (effectively, import tariffs will be reinstated on complete cars, but lower rates charged on key parts), and production quotas implemented, so that Thai-manufactured EVs will be more competitive than both foreign electric models and all ICE vehicles.

Yet, if it’s to remain a global leader in vehicle manufacturing, Thailand has little choice but to build up a more robust technology ecosystem.

“The government needs to maintain the supply chain of the automotive industry, because it’s going to impact about 10% of our GDP if we do nothing and we lose it,” said Ekachai Yimsakul, managing director of Arun Plus Co., which develops and promotes the local EV industry. “We’re talking about 600,000 people in the automotive industry in the country, and more than 10,000 companies.”

Arun Plus was set up by PTT Pcl — a state-backed oil and gas conglomerate which also operates more than 2,000 gas stations across the country — and was given a simple remit: find new opportunities that allow PTT to enter the EV business.

“Because we are a state-owned enterprise, we need to participate in the development of the EV ecosystem for the country,” Ekachai told me during a recent chat at the company’s headquarters in Bangkok. Like PTT itself, Ekachai is new to the EV industry, with a background in project management setting up oil and gas infrastructure. But in Thailand’s electric vehicle sector, everyone is new to the game.

That includes one of Arun Plus’s biggest partners. Last year, the firm signed a $1 billion(1)deal with Foxconn to develop and manufacture EVs in Thailand, with their factory to be completed by 2024. Although it’s the world’s largest contract maker of electronics, and a key global supplier of iPhones, PCs and networking equipment, the Taiwanese company has yet to become a player in the EV-assembly business. It currently provides components and partially-completed modules for use in vehicles produced by automotive clients such as Tesla Inc.

Arun Plus’s role in the new venture — called Horizon Plus — will be to build the factory and infrastructure, while Foxconn will manage operations and handle the supply chain. Arun Plus has also signed on with CATL, one of the world’s biggest battery makers, to produce power storage systems that would be sold to Horizon Plus.

China’s BYD is taking a similar approach, hooking up with Thai logistics and property development conglomerate WHA Group. That venture expects to start production in 2024 to make EVs for export, the company announced earlier this month. The deal takes the total capacity of various ventures announced in Thailand to 830,000 EVs annually. By contrast, the country had capacity to make 4.1 million vehicles in 2019, according to data compiled by Krungsri Research.

Yet the real struggle for BYD, Foxconn and their local partners won’t be just in setting up new factories and assembling cars, but in building from scratch a supply chain that requires a lot of new parts.

Whereas combustion engines revolve around heavy blocks of metal with plumbing that includes water, fuel and air hoses, EVs are more akin to a PC on wheels. That means more electric wires, precision sensors and dozens of electronic components — the kind of products readily available in Shenzhen, southern China’s hub of technology manufacturing where BYD and Foxconn both run massive factories.

Around 70% of the parts that go into an ICE vehicle are sourced locally, and half of that 70% — such as steering wheels, rims and chassis — can easily be used in EVs, Ekachai of Arun Plus estimates.

But it’s the new components that Thailand lacks — especially batteries — and which require electronics companies such as Foxconn, CATL and BYD to set up new supply chains. While the country does have a small base in technology manufacturing, including Delta Electronics Thailand — the local affiliate of the Taipei-based manufacturer — it still lags behind Taiwan and China.

That means if Thailand wants to keep its place as the Detroit of Asia, it’ll also need to work on becoming the Shenzhen of Southeast Asia.

More From This Writer and Others at Bloomberg Opinion:

• Why the iPhone Is Missing From Foxconn’s Asian Tour: Tim Culpan

• Clean Tech Comes Back Around: Elements by Liam Denning

Tim Culpan is a Bloomberg Opinion columnist covering technology in Asia. Previously, he was a technology reporter for Bloomberg News.

Tue Sep 27 , 2022
Research and innovation in blockchain in the automotive manufacturing and supply sector is on the rise. The most recent figures show that the number of blockchain related patent applications in the industry stood at 10 in the three months ending July – up from 9 over the same period in […] 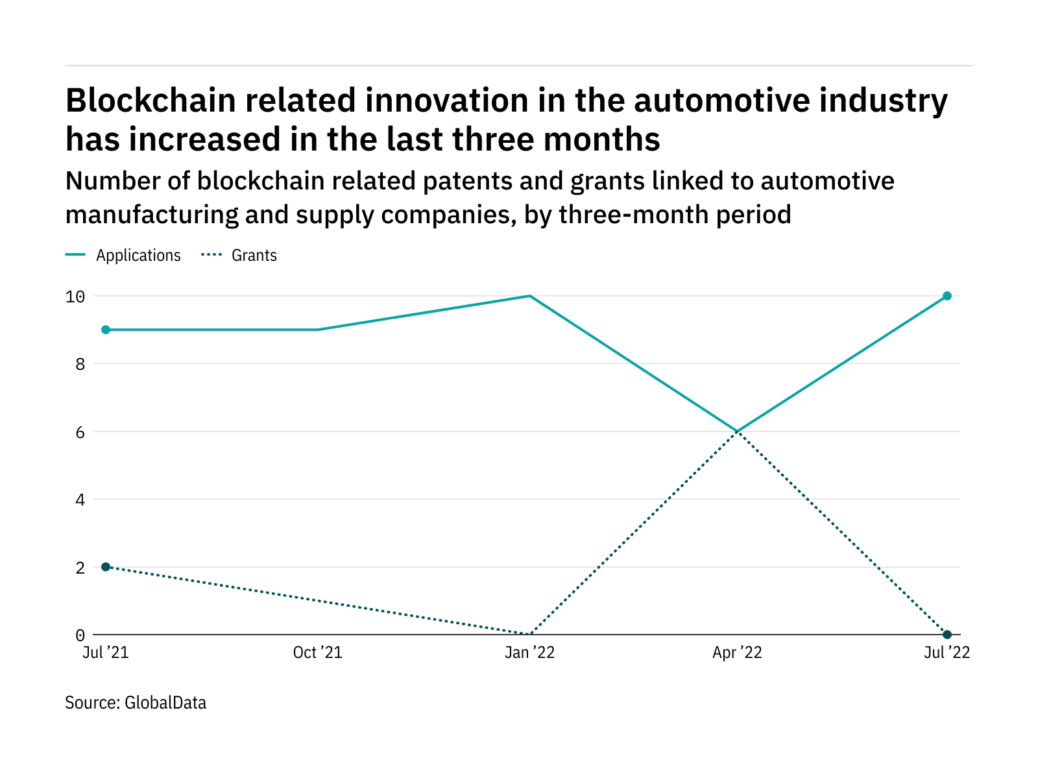