… the automobile and oil industries are among the largest on Earth.

They control nations. The value of the assets under their control runs into the trillions of dollars.

And these industries are about to get totally upended.

That’s from Matt McCall’s most recent issue of Investment Opportunities.

Matt’s vision of how transportation will evolve this decade is astonishing. And as consumers and beneficiaries of this transformation, there’s reason for excitement.

But for many of the major players in the vehicle and oil industries, this sea-change carries a different emotional charge — concern.

That’s because not all the old players will adapt and survive in this new world, despite their dominance from yesteryear.

(The auto and oil industries) are about to undergo a massive transformation that will create another historic reordering of the global economy.

During this time of epic change, huge, seemingly dominant companies will go out of business very quickly.

New companies will spring up in their place and make their shareholders very wealthy.

If you understand what’s about to happen, you could make a tremendous amount of money in a short time.

What’s coming is going to be that powerful and that fast.

In today’s Digest, let’s make sure you understand what’s coming so that you can be on the right side of this volatile-yet-lucrative transformation.

First, for any newer Digest readers, Matt is our resident thematic investor, as well as a technology expert.

In his newsletters Investment Opportunities and Early Stage Investor, he identifies the massive trends that are reshaping our world, then finds the companies best-positioned to benefit, making fortunes for their investors.

The point is, Matt’s track record suggests he has a pulse on how to play these massive technology shifts and cultural megatrends. So, when he’s bullish on an idea, it’s wise to take note.

With that in mind, let’s return to the transportation industry and what’s coming …

Think of the transportation industry like a large dining table that took decades and trillions of dollars to set up. The tablecloth is about to get yanked out.

While this perfect storm is terrifying to some, I hope you’ll see it as a huge opportunity.

At this point in his issue, Matt highlights the “4 Horsemen of the Auto Industry Apocalypse.”

There’s lots to cover in this Digest, so I’ll only briefly cover what Matt has highlighted as these four harbingers of doom.

Disruptive Change #1: The decline of the internal combustion engine.

Matt’s not making any calls for the “death of oil” anytime in the next decade. But the massive shift toward electric vehicles is where the growth will occur, not in yesterday’s combustible-engine vehicles.

Instead of going through all the expense and time associated with owning a car, many people — especially the under-40 crowd — would rather just “Uber it” to get where they need to go.

This challenges the decades-old idea of everyone owning their own car.

If we look at the numbers, Matt writes that total U.S. vehicle sales rebounded strongly coming out of the Great Recession. But since then, except for a couple spikes, sales have largely plateaued and even trended down.

As you read this, Waymo — owned by Google’s parent Alphabet — is successfully testing self-driving taxis in Phoenix, Arizona (and they’re not the only ones refining this technology).

Matt tells us that while estimates of autonomous vehicle adoption over the next 20 years are all over the place, it’s safe to say this technology is extremely disruptive to the “old” transportation industry.

Disruptive Change #4: The growing importance of “tech” in cars.

From entertainment systems to navigation systems to voice-activated controls to autonomous driving features, the role that software-driven high technology plays in cars is growing every year.

***The massive numbers behind this trend

Let’s now turn from what’s behind the coming change, to the size of this growth-market.

Here’s Matt to set the stage:

Thanks to extraordinary advances in technology, an epic period is coming for the trillion-dollar auto industry.

If any of today’s giants are unable to navigate the coming perfect storm of change, they’ll quickly go out of business.

Matt tells us that the Energy Industry Administration (EIA) calls for electric vehicle sales to more than triple to 6.5 million units by 2024.

Even if we basically split the difference and EV sales increase to 20 million units in the next few years, it is an easy 10X opportunity for investors.

The future of this trend is even more exciting when we factor in autonomous vehicles (AV).

Matt believes that owning a car 10 years from now will be an option, but one that very few choose.

The reason is simple — the economics won’t make sense given ride-sharing and autonomous vehicles.

Given this, the AV markets will enjoy astonishing growth. While Intel puts a $7 trillion figure on the AV market, Matt thinks it will be closer to $10 trillion.

Even if I am wrong and Intel is too optimistic, there is no doubt that trillions of dollars will change hands in the future of transportation. It is not very often that an opportunity this big and with this degree of certainty is in front of investors.

I don’t want to make this Digest too long, so I’ll move on at this point. But if you want to better understand what’s coming our way with the EV/AV trend, I strongly encourage you to sign up for Matt’s Investment Opportunities newsletter and read this issue.

He dives into safety implications, more details on ride-sharing, even flying cars (below is a photo of Matt at the CES convention in Las Vegas, standing in front of the Hyundai/Uber flying car).

There are countless ways to play this megatrend.

But for simple, broad exposure, you could look at the iShares Self-Driving EV and Tech ETF, IRDV. 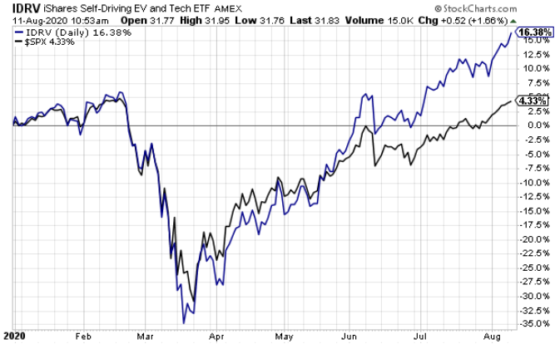 Among its top-10 largest holdings are Tesla, Apple, Nvidia, Qualcomm, Alphabet, and Toyota.

But while those are great names, they may not be the most explosive way to play this transportation transformation. That’s because the ETF has 114 holdings. This means the average (or mediocre) returns of many may dilute the extraordinary returns of a few. 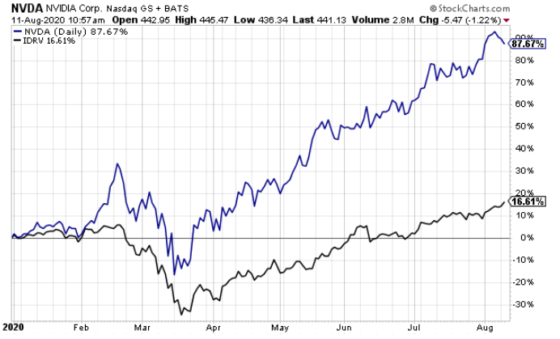 Given this, if you’re looking for explosive growth, an ETF won’t be the best way to play it.

Instead, you could pick leaders in the various sub-sectors that contribute to, or complement, the final EV. For example, think batteries, ride-sharing companies, or the semiconductors used in EVs, to name a few.

Bottom line: the changes that are coming in transportation are exciting. With some wise portfolio positioning today, the impact on your portfolio should be equally exciting.

Here’s Matt with the final word:

Transportation 2.0 will change our lives in the coming decade. Whatever we can envision right now is only the tip of the iceberg.

It’s just like a decade ago when the first iPhone was released. Very few people imagined how that device would change our world.

Have a good evening,

Fri Sep 4 , 2020
Colours are making a comeback with new cars – and I’m all here for it. We’ve seen plenty of new models from various manufacturers featuring hero shots of bright yellows, blues, reds, and best of all, greens. As the resident ‘green car’ man at CarExpert, I thought it’d be fun […]