SkyDrive Inc, a Japanese urban mobility company has announced that they have successfully completed manned test flights for their SD-03 Flying Car. The company held the first public demonstration of their ‘flying car’ project on the 25th of August 2020 in Japan. The successful manned flights were held over the […]

SkyDrive Inc, a Japanese urban mobility company has announced that they have successfully completed manned test flights for their SD-03 Flying Car. The company held the first public demonstration of their ‘flying car’ project on the 25th of August 2020 in Japan.

The successful manned flights were held over the 2.5-acre (10,000 sq. metre) Toyota Test Fields in Japan. The single-seater flying car took-off several feet off ground and circled the entire field for a time period of about four minutes.

The test flight was handled by a pilot on board, although computer-assisted controls ensured safety and flight stability. There were also technical staff members at the field monitoring the conditions and aircraft performance throughout the test.

As per SkyDrive, the SD-03 flying car comes powered by eight electric motors, two at each corner. The two rotors power the four drive rotors, which rotate individually in opposite directions. The use of eight electric motors is to ensure safety even in emergency conditions while also complying with all necessary standards.

In terms of design, the SkyDrive SD-03 flying car is said to feature a sleek and aerodynamic styling. The vehicle will come with two white lights at the front while a red light will also be present at the bottom. This red light is said to help observers from the ground determine which way the flying car is headed in the sky.

SkyDrive is said to now be working on expanding the conditions under which testing of these flying cars take place. This should help them further improve the technology while also gain full compliance under all the safety measures and regulations of the country’s Civil Aeronautics Act. The company is also looking at obtaining approvals for testing the flying car outside the limits of their facility by end-2020.

Flying cars have always caught the fancy of people across the world. There have been many projects for ‘flying cars’ which have taken place over the years, however, the latest from SkyDrive seems to be the most promising.

BIKER DAD: Help this biker get his stolen custom BMW back

Sun Aug 30 , 2020
PRESCOTT VALLEY, Ariz. (WKRG/BIKER DAD) — Police in Arizona are trying to help get the owner of a custom motorcycle his bike back, and they’re asking for your help to find it. According to a Facebook post, the bike was swiped in Prescott Valley, Arizona. The post says the “motorcycle […] 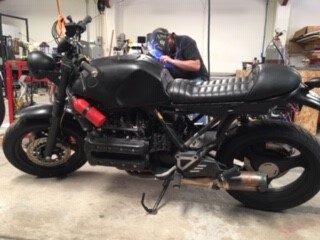