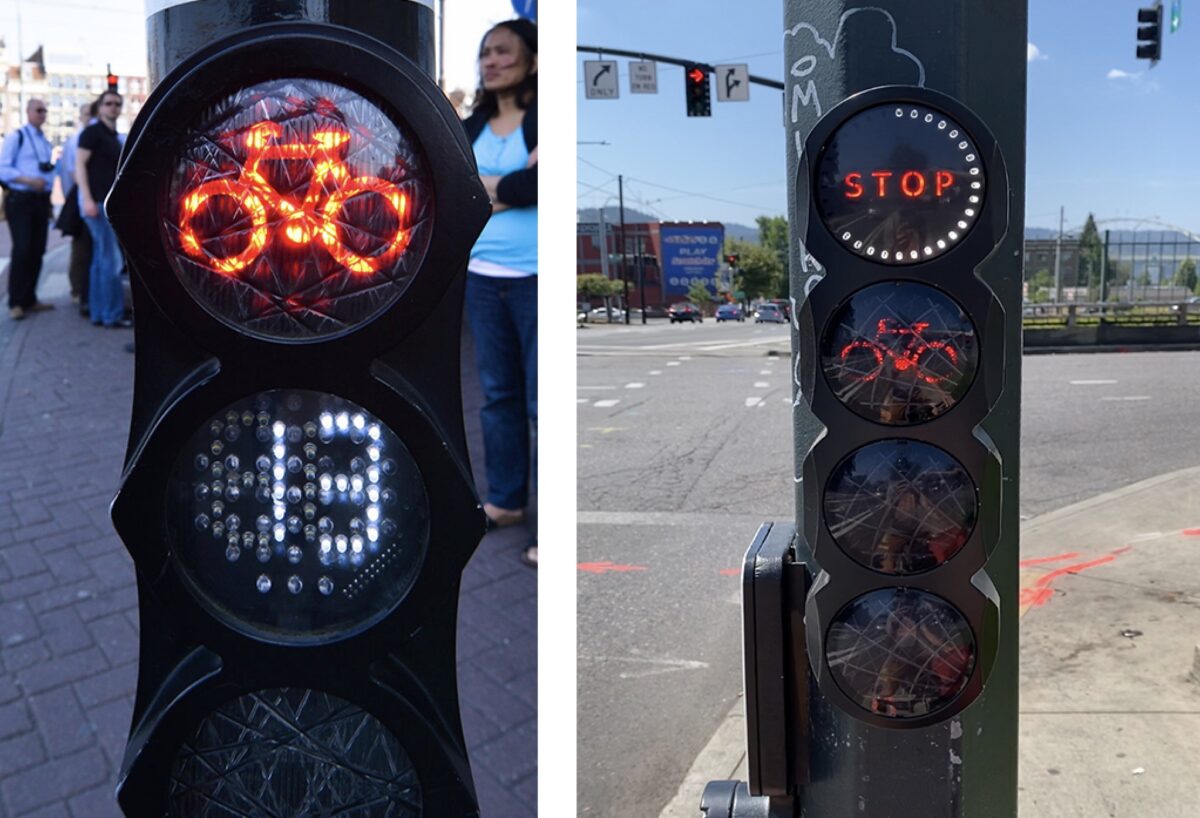 The infamous Broadway and Williams intersection has a new signal. I say infamous because this location has a long and sordid history of right-hooks and interventions by the City of Portland to try and stop them. The latest change is aimed at helping bicycle users comply with the traffic signals.

The Portland Bureau of Transportation has installed a new “near side” (meaning it’s close to where you wait) signal with a sensor that triggers a countdown timer. The signal is part of a statewide research project to figure out what type of bike signals will work best. In a Tweet last week, PBOT said this new signal is the first first “Dutch-style countdown signal in the United States” (but it appears to be similar in function and provenance to the bike signal at N Interstate and Oregon).

Portlander Gerben Gerritsen is happy to see the new signal. He remembers them fondly from his hometown of Utrecht, a city in the Netherlands and one of the most bike-friendly places in the world. “It’s a life changer. I’m glad they’re coming to Portland,” he shared with us. “You know how long you’ll have to wait. That way you know if you have time to take off your gloves, check your backpack, phone etc. No mid-process scramble when you’re taking off your jacket.”

The new signal, which came to Portland directly from the Netherlands, is triggered by a sensor in the bike lane about 30 feet before the intersection. When you roll over it, the bright lights on the countdown circle go on immediately. This feedback is key. According to researchers behind the project, these “bicycle feedback confirmation devices” are meant to, “better communicate presence detection and delay to people on bicycles.” The thinking is when bicycle users know a signal is aware of their presence, they’re more likely to wait and comply with it. Another feedback device being used in Portland is a bright blue light that turns on when you approach an intersection.

This research is important because bicycle signals do not currently have full federal approval. Since 2013 the Federal Highway Administration has only granted bicycle signals “interim approval” status which limits their implementation. PBOT engineers hope data they collect can inform research that persuades the FHWA to grant full approval.

The detection system with this signal is more advanced than others because it doesn’t require you to place your bike in a specific spot while waiting. Educating bicycle riders on how to trigger green lights has been a challenge for PBOT. A 2013 study revealed that about half of riders have no idea how to do it.

Portland currently has about 30 bike-only signals citywide. The first one was installed in 2004 at Interstate and NE Oregon near Peace Park.

— Jonathan Maus: (503) 706-8804, @jonathan_maus on Twitter and [email protected]
— Get our headlines delivered to your inbox.
— Support this independent community media outlet with a one-time contribution or monthly subscription.

Sun Aug 23 , 2020
Here’s our guide to the greatest car collections in the world. Consider this a collection of automotive bucket-list locations that you have to visit, one day. And who knows – some of them my now be opening again, albeit with strict social distancing measures in place. Please check museum websites […]