The 2021 Mercedes-Benz S-Class could be the first car-maker in the world to have levels of autonomy that won’t require driver input up to 60kmh.

The inventor of the motor car – Mercedes-Benz – is poised to take the first big step into the next level of autonomous driving, and has likened the achievement to planting a flag on the moon.

Speaking to media ahead of the unveiling of the 2021 Mercedes S-Class sedan, the global boss of the German brand, Ola Kallenius, said the company was about to roll out “Level Three” autonomy, pending government approval.

Level Three autonomy means drivers can take their hands off the wheel for extended periods because the car is equipped with advanced sensors and maps, and has failsafe systems.

It was thought this technology would first be used on freeways – rather than in city driving where cars need to detect signals, pedestrians and stop-start traffic.

However, Mercedes says drivers will be able to hand over control to the car at speeds up to 60kmh – in jurisdictions where the tech is allowed. For now, only German authorities are poised to permit the use of such technology, but other countries could follow.

“We are really putting a stake in the ground with … the new S-Class,” said Mr Kallenius. “If we are successful with the legal framework for Level Three which we predict, (we) will be then the first one to plant a flag on the moon in terms of doing Level Three.”

“With the new S Class we will enter a new dimension, because for Germany by next year we can offer Level Three automatic driving … up to 60kmh you drive without having any obligation to intervene,” he said.

When asked to compare the achievement of developing this level of technology, Mr Kallenius said: “It feels like in a way it’s … a decathlon times ten. It’s not enough to do one thing really well. In terms of automated driving in the new S-Class, we will attempt next year, probably as the first manufacturer in the world, to certify a Level Three system for certain driving situations, to really prove that the machine can take over and be fully responsible in some driving situations, even where the human is looking out the window.”

Mr Kallenius said the aim was to make the driving assistance experience special, with “those little angels in the background that take care of you. When it comes to Mercedes it’s all bells and whistles in every dimension.”

The next level of autonomous technology will likely be rolled out in Germany, the rest of Europe, the US and China before it is introduced in Australia, because our regulations currently don’t allow it – and the driver must always be in control of the vehicle.

The senior executive said the 2021 Mercedes S-Class needed a new level of computing power to handle the autonomous driving tech.

“You need an unbelievably performing chip set,” said Mr Kallenius. “You need a comprehensive software stack and you need sensing.”

Mercedes said future models may offer certain levels of tech at a premium price or behind a “paywall”, and charge owners a subscription fee.

“We’re going to put so much computing power into future Mercedes, when you buy the car that is not the technical peak of the car,” said Mr Kallenius. “If you don’t want all the bells and whistles (at first) you can make up your mind later.

“The technical peak of the car … will evolve (to) enhance and improve the driving assistance … as time progresses. You then also change the selling logic. You can upsell … or in a premium way give the customer more content to create loyalty. So this partnership will come with a business model change as well.”

Meanwhile, Mercedes said COVID-19 did not delay the development of the new S-Class, but the company did change the way it operated.

“We changed the way we worked and there was additional stress for engineers and many people to make it happen (but) we didn’t delay the S-Class launch one bit.”

After initially predicting autonomous cars would be on public roads in 2020, the world’s car makers have since pushed back their forecasts indefinitely after struggling to get the technology up to speed in high traffic situations.

Thu Sep 3 , 2020
Car bodies, held from their roofs by giant blue tongs, began rotating amid the clang of machinery. Self-driving robot carts darted by, carrying tools and parts. The first finished vehicles, almost all of them black, reached the end of the production line, where workers in black-and-gray uniforms closely inspected them. […] 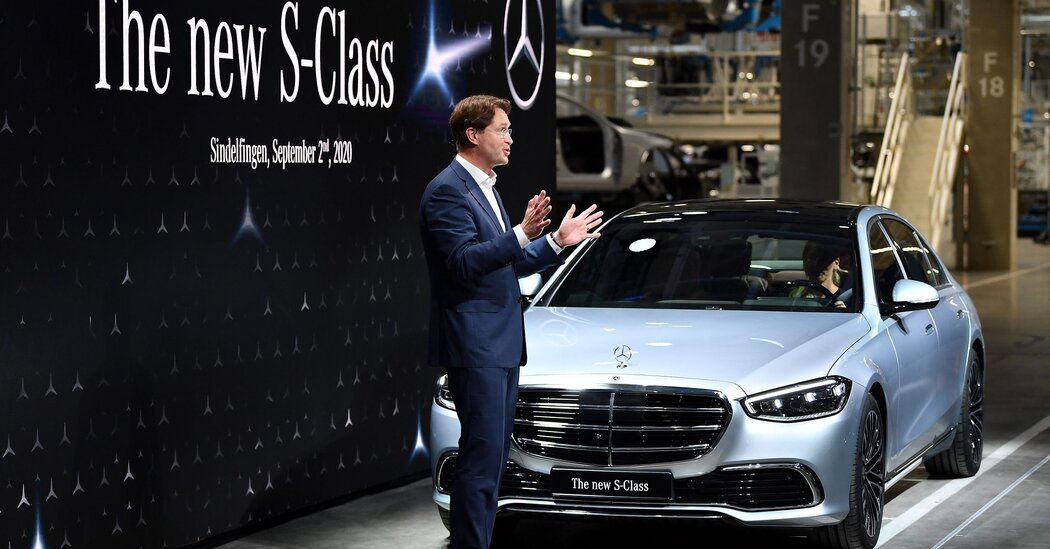