A six-car crash on the way to the green flag eliminated three Andretti Autosport drivers before the start of Saturday’s NTT IndyCar Series race at World Wide Technolgy Raceway at Gateway.

Alex Palou pulled out of line and was followed by Simon Pagenaud, who then was hit by Oliver Askew. That started a chain reaction that collected the Andretti cars.

IndyCar officials penalized Palou and Askew for avoidable contact and sent both to the back of the field on the restart.

Veach said he tried to move to the middle lane when the inside lane slowed.

“That’s when I saw Pagenaud sideways,” Veach said on NBCSN. “From that point, everyone jammed on the brakes. We tried to stop the best we could, but it seemed everyone was in the same position. The window closed so quickly, some of us were left without an option.”

The crash, which also took Ed Carpenter out of contention, caused the first 14 of the race’s 200 laps to be run under a yellow flag.

Pagenaud’s team changed a front wing, but he retired after completing 66 laps because he was unable to make minimum speed.

“Think we had a good car today, never even got a chance to really test it for tomorrow,” Pagenaud told NBCSN pit reporter Kevin Lee. “It’s a little too much excitement at the start of the race from the back of us. Real shame.

“The front slowed, down, and I don’t know if it was the accordion effect. It is what it is. It’s very unfortunate. Need them to be willing to just be a bit more patient.”

The incident continued a miserable season for Rossi, who had crashed Sunday after leading in the Indy 500.

After the Gateway wreck, Rossi climbed from his No. 27 Dallara-Honda, hopped the pit wall and walked directly to teammate Colton Herta’s pit apparently for an explanation of what happened.

Sun Aug 30 , 2020
Ford dropped a brief teaser video for its 2021 GT Heritage Edition Friday afternoon, giving us our first glimpse of a car that will honor the legacy of the #98 Ford GT40 Mk II that won the inaugural 24 Hours of Daytona in 1966 in the hands of Ken Miles […] 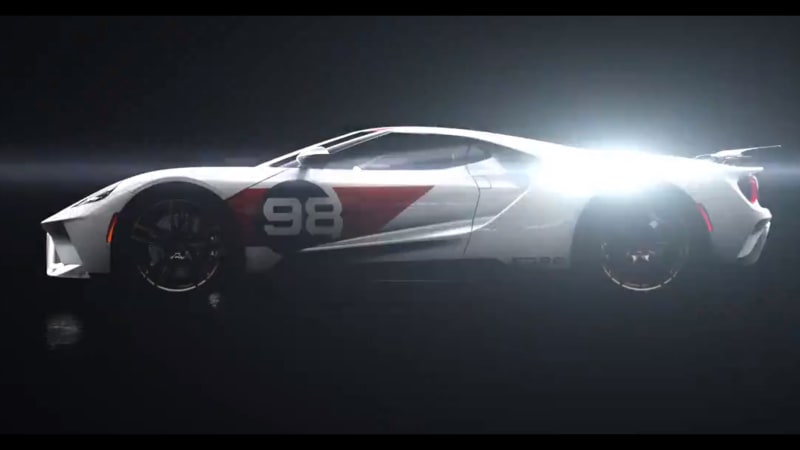