Everybody who talks about bikes talks about Copenhagen and its incredible bike culture, the way bikes are just part of the urban fabric and everyone just rides, in skirts and suits and everyday clothing. But before 2006 nobody used the phrase “bike culture.” Bikes were for sport and spandex or they were for kids.

Then Mikael Colville-Andersen, at the time a film director, took a photo that launched a thousand blogs and a whole new way of thinking about bikes. He tells TreeHugger:

I did a lot of street photography, and I took one picture one morning, on my morning commute, not a great picture but the light had just turned green, there’s a woman pushing off on the right, there’s two guys squeezing past and in the middle there is a woman who just hasn’t moved yet, a pillar of calm in a world of chaos.

My introduction to Copenhagenize was inauspicious, a response to a post where I complained that the person heading up a bicycle advocacy group in New York should perhaps set a good example by wearing a helmet. Mikael wrote:

He was right, and I have learned a lot since then.

I finally met Mikael Colville-Andersen in Copenhagen, and he did not smack me about my helmetless head, he was in fact rather friendly, recognizing that my views about cycling have certainly changed over the years. He’s riding a Bullitt cargo bike, and graciously agreed to take me on a tour of Copenhagen’s bike infrastructure.

Also in town was Chris Turner, author of The Geography of Hope and The Leap, here making a point to Mikael at Falernum, a bar and restaurant that became home base.

What you quickly learn in Copenhagen is that bikes are just transportation, the way people get around. They are what people do, just like walking. Nobody wears special clothing; helmets are not an unusual sight but they are not on a very high percentage of people.

There are all kinds of bizarre bike infrastructure gestures, like places for your feet at intersections and this, a garbage can that Mikael suggested to the city, that is tilted to be easier to hit while on a bike. Mikael demonstrates for us here.

There are other examples that let you know that they get bikes in Copenhagen. Where I live in Toronto, if there is construction, the bike lane is just wiped out in deference to the cars. Here, they build a proper protected diversion for the bikes and the cars are squeezed. It is just a different attitude; bikes matter.

There are entire bridges devoted to bikes and pedestrians, such as this one across the harbour.

It is not perfect and seamless; I was stuck here for a few minutes near a major subway station as people filled the bike lane to get on their buses. But it was the only time this happened; usually the bike lane is respected by cars, taxis, construction trades, everyone that treats it as parking in North America.

Sometimes too, it is a bit of a mess, with bikes everywhere, often filling the sidewalks. But they certainly take up a lot less space than cars do.

In the end, every time I see a family on their bike like this, I smile. It works so well, and truly is a model for the rest of the world. We can all get Copenhagenized.

Thanks to Chris Turner and Mikael Colville-Andersen for showing me how to Copenhagenize.

Thu Aug 27 , 2020
StreetLight Data, a big data platform that helps cities unlock mobility insights from location data from smartphone apps, has raised $15 million in a series D round of funding. The raise comes as cities around the world are having to adapt to social distancing measures that require shifts in transportation […] 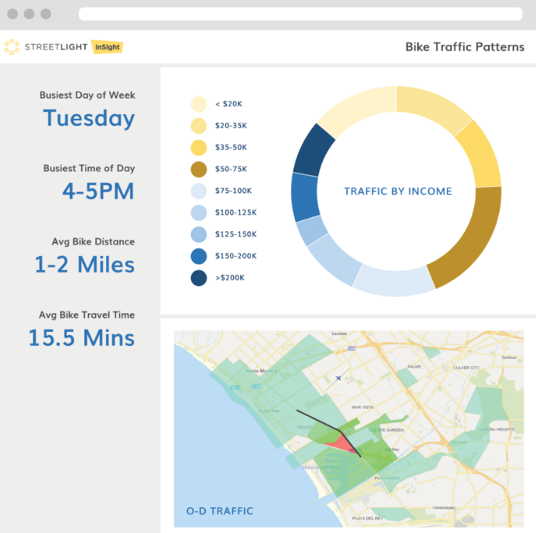