At this point in my life, I think the only thing I can say I actually understand with any degree of certainty is that people need quality, piping-hot Changli content. And I know it’s my duty to provide that as best I can. With that in mind, let’s take a look at how the Changli is doing after about three months of hard, unforgiving ownership.

I do have lots more Changli content planned, just so you know. We’re in this for the long haul. I’m in the process of getting it legally registered here—seatbelts have been ordered, the only technical part needed to meet the rules governing North Carolina’s Low-Speed Vehicle category. But there’s still one sticking point: in order to get it registered, I’m told that it has to be inspected by the NC DMV. I’ve reached out to them but have yet to hear back.

Of course, everything is kind of throttled back here in Pandemic Times, so I’m not too concerned, and not yet at the point of calling and asking do you know who I am? There’s also the issue of getting the Changli to a DMV station; if it requires driving on roads that have more than a 35 mph limit, I can’t really do that, and with my 28-ish miles of range, I can’t really expect to go to, say, Raleigh and back. So, registration is ongoing, and while I’m confident I’ll get it all sorted, I’m not done yet.

I also am working out logistics for a head-to-head against a golf cart, on a golf course, and of course there’s still a plan to dyno the thing, get more power, more range and more everything. Oh, and I’d love to try autocrossing it. So don’t despair, this well has not even come close to running dry.

G/O Media may get a commission

In the meantime, I want to give you an idea how the Changli is holding up, because so many people in the comments to past articles were convinced this thing would be effectively disposable. They warned it’d decay and melt before my eyes, like that bald Nazi from Raiders of the Lost Ark when exposed to unfiltered Ark of the Covenant rays.

I’m happy to say I don’t think this is the case at all. The Changli is holding up just fine, and I try to use it several times a week. It’s been a pretty wet summer here as well, and this thing lives outside on a gravel-and-weeds driveway, so it’s hardly pampered. Nobody is babying the Changli.

That doesn’t mean there haven’t been issues, though. There are some minor things worth mentioning:

This is a minor but annoying grievance: The hinge for the sun visor became quite loose, to the point where the visor just flops down immediately and refuses to stay up at all.

Happily, there was an easy solution: I stuck some Velcro squares on the visor and the headliner, and now the Velcro does the job of keeping the visor in place. The headliner-based Velcro square did not adhere to the fuzzy headliner material at all, so I had to use a little screw.

The right rear tire seems to have a slow leak

I came out the other day to find the right rear tire totally flat. It’s possible I had a hand in this, as I have driven over bricks and rocks and through big potholes, so this may have been caused by my cavalier approach to driving surfaces.

On the bright side, though, it gave me an opportunity to try out the electric air compressor that came with the car, and I was delighted to discover that it’s designed to plug into the Changli’s charging port, not a wall outlet!

That means I can use this anywhere on the road, pulling electricity from the Changli to inflate the tire! I assumed it would just have a wall plug, but this is way better. It also confirms that the Changli’s charging port is bi-directional, which opens up some interesting possibilities.

One other tire-related development is that I happened to find a bit of plastic that works really well to hold the Changli’s spare tire in its Lincoln Continental-style spare tire hump:

Some random plastic thing and a couple of zip ties threaded through some awl-punched holes in the rear plastic trim, and I’m looking like a classy-ass bigshot here.

As I said, it’s been ridiculously wet here lately, and while I haven’t noticed any major leaks in the passenger compartment, I did notice that the headliner over the rear door is showing some telltale water stains.

I expect water is coming in via the top edge of the door and working its way under the headliner; it’s not a huge deal, but I should see if there’s any way I can mitigate this to prevent future damage.

So far, only a bit of rust

I’d be surprised if this thing had any real rustproofing at all, but the good news is that even with all the humidity and rain and general sogginess, the only places I see rust forming are on the front bumper brackets. I bet I can hit them with a rust-preventing paint to keep it under control.

These are also some of the flimsiest metal bits on the whole thing, so I’m not really surprised. For whatever reason, the rear bumper brackets seem to be in much better shape, rust-wise:

Interior is holding up fine, just a steering wheel squeak

Even though the plastics and knobs and various parts aren’t really up to mainstream automotive standards, they’re not terrible, and so far they’re holding up just fine. The steering wheel has developed a bit of an annoying squeak (I’ll spritz it with some WD-40), but at this point everything else is OK.

I have noticed a few more spider webs inside than I’d think normal, considering the Changli gets regular use. I was confused by this until I poked around in the back and saw this:

How’d that mud splash up inside the car? This is by the rear corner, where the luggage floor meets the door. What I found was that the hinged motor lid, which makes up the rear floor of the car, doesn’t quite totally seal the rear, leaving a little gap right by the rear corner, which is how mud can splash up inside, and, I suspect, how my spider friends keep getting into the car. I might seal this up with something, as I’m not running a spider hostel here.

All in all, pretty minor stuff. The Changli’s fundamental mechanical performance has been trouble-free, with that entire horse-plus-a-horse-fetus worth of power flinging me around the neighborhood with gleeful abandon.

On one of my Changli-ventures I happened to find a parked Smart, and was surprised how close the Changli is in size:

The Smart is a bit wider and longer and the Changli is a bit taller, but the dimensions aren’t all that different. And while, sure, the Smart can hit highway speeds, I’ve had three full-grown adults in the Changli on multiple occasions, which you can’t do in a Smart, and, of course, the Changli is an order of magnitude cheaper.

The takeaway here is that this $1,200 online impulse-buy car is doing just fine, all things considered. There are issues, sure, but nothing terribly surprising, and nothing that makes me too concerned about its longevity.

I better keep an eye on that water trap over the rear door, though.

And, of course remember that there’s more Changli content coming up, so don’t despair! This is important to us all.

Tue Aug 25 , 2020
Get all the latest news on coronavirus and more delivered daily to your inbox. Sign up here. France is setting aside more than $21 million to support cyclists and to keep pollution levels and public transportation crowds low once coronavirus restrictions are lifted. The government plan allocates up to $54 (50 euro) to everyone in the country […] 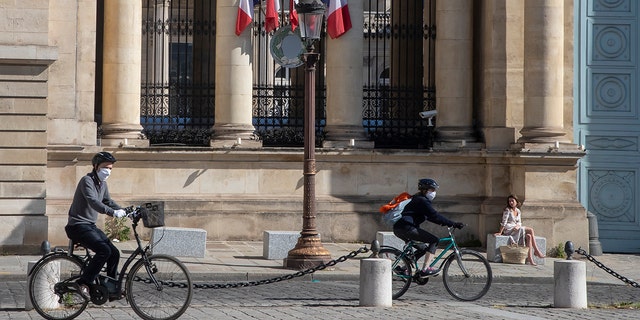