Vehicle enthusiasts getting together again as pandemic restrictions ease

Some of the most beautiful cars and trucks imaginable cruise into the classic automobile show venue and line up for public viewing, and the shows are back on, following the relaxation of some COVID-19 restrictions.

Rows and rows of driveable works of art are on display. Also, some of the most imaginative vehicles are there, including custom-built rusty rat rods, autos with murals, and even a car with plane wings.

Southwest Florida has many classic automobile shows open to the public, some for free, some held as fundraisers for worthy causes. It’s a great family occasion or a way to spend a few hours with friends.

Some are “Cruise Ins,” casual and friendly events open to the public. “Car guys and car gals” bring their rides, even if there is still work to be done on them. Shows often have door prizes and award competitions. Naturally, summer events are smaller than in the winter season.

Then there are the huge, highly-planned annual events. For those, vehicle owners register ahead of time, drive in early to get parked, then spend the day networking and sharing stories, awaiting the judges’ awards. These are also casual to semi-casual events, but people also come dressed in their church clothes. A few people like to wear costumes that relate to their autos.

Due to the COVID-19 restrictions, all auto show events were postponed or canceled in March. A hugely popular one, the 32nd Annual Car Show held by the Venice Region of the Antique Automobile Club of America, was called off.

Two websites with event listings are CollectorCarsTV.com and FlaCarShows.com. Or just search online for ”car shows near me.” With COVID-19, it’s good to double-check that everything is a go for the day you choose.

Lance’s Cruzin To The Hop

Lance Hubschmitt and his wife, Gaye, have been bringing collector autos to the people for about 26 years now. Lance had a television show for nearly 12 years where owners would bring in their vehicles and explain what they are about. Now, instead, he is emcee and pipes out 1950s music to entertain showgoers. Lance and Gaye are also at many of the large shows that promote charities and causes. They often provide the loud speaker for award ceremonies.

“It brings people together,” Gaye said. The “car guys and gals” learn a lot from each other and become friends. The shows give them a chance to talk about their cars, share trade secrets, and network, she said.

Randy Keller has been bringing his 1984 Cadillac Eldorado Biarritz to Lance’s shows for about 17 years now. He moved to Southwest Florida in 1998 and went to his first car show in 2002 with a friend in Port Charlotte, he said. Lance’s Cruzin To The Hop was hosting the show at a restaurant.

“I was hooked,” Keller said. He bought his first classic car, the Eldorado, and has been showing ever since. “Birds of a feather flock together,” Keller said. Being car guys is the common denominator. It’s good camaraderie, he said.

“Friends are the family you choose for yourself,” Lance often says as he closes his car shows. His shows are listed on CollectorCarsTV.com.

There are numerous clubs for the classic automobile subculture.

Owning a beloved vehicle can be a retirement fulfillment of a lifelong dream, or a hobby. Some people want to have the kind of vehicle they drove in college. Some have their grandfather’s car and others plan to hand theirs down as an inheritance. There are also the “trailer queens” that are transported and are only for show.

Cars in the lineup can include American “Detroit iron” and muscle cars; custom-built hot rods and rat rods; well-known European brands such as Volkswagen, Ferrari, Lamborghini, Mercedes and BMW; the British Austin Healey, Triumph and Bugeye Sprite; and sometimes, iconic cars such as the Ford Mustang driven by Steve McQueen.

There are also some of the shiniest, most beautiful classic trucks you might ever see: Studebaker, Ford, GMC, Dodge and Chevrolet.

If you search for “auto shows around the world,” you’ll find out the classic automobile subculture holds gatherings in Canada and Cuba, in Fiji and Finland, in Africa and Australia, and in Chile and China. The world is wild about them.

Now, there is something called an Antarctica Classic, but that is an 11-day Antarctica sightseeing ship cruise. But wait. There may be a classic vehicle on that continent, the Antarctic Snow Cruiser. The 75,000 pound vehicle was brought there in 1940 for scientific expeditions but no one can find it now, according to Wikipedia. The cruiser could be buried under snow or perhaps it has sunk due to melting ice.

Car conventions that display the newest vehicles coming onto the market, such as Auto Shanghai, and New York International Auto Show, are shows of the latest and greatest.

“Usually, the classic car moniker applies to vehicles over 20 years old. Antique cars are over 45 years old, and vintage cars are built between 1919 and 1930,” according to the West Coast Shipping website. Definitions can vary. One thing for sure, these shows have some of the shiniest (or rustiest), most beautiful (or imaginative) vehicles you may ever see.

Sat Sep 5 , 2020
Unveiled earlier last month, Kia Sonet is scheduled for launch on 18th September. Today, marks the start of production of Sonet in India. The photo of Sonet you see in this post, is the first ever Sonet that has been produced in the world. It rolled out of Kia India […] 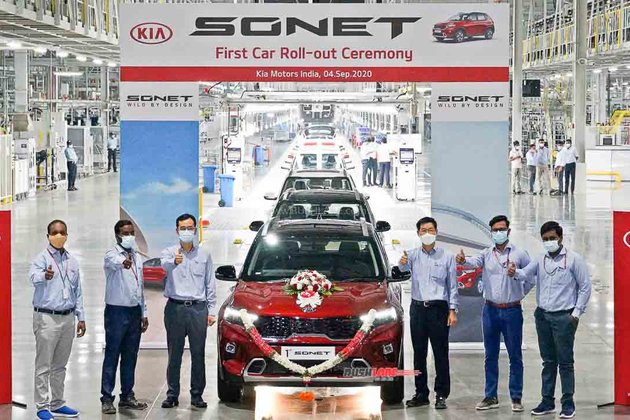