CLOSE Sights from Burning Man 2018. Reno Gazette-Journal Hotels, grocers and restaurants alike will be reeling from yet another gut punch as summer comes to a close without the grand finale of Burning Man.  For many, it’s just the final blow after a summer without Artown, Hot August Nights, the rodeo, […]

Hotels, grocers and restaurants alike will be reeling from yet another gut punch as summer comes to a close without the grand finale of Burning Man.

For many, it’s just the final blow after a summer without Artown, Hot August Nights, the rodeo, balloon and air races and more special events that bring in tens of thousands of visitors and hundreds of millions in economic stimulus.

“We’ve done pretty well this summer considering, but we know it won’t continue,” said Brian Kulpin, spokesman for the Reno-Tahoe International Airport. “With no special events in September, we know it’s going to hurt. The biggest drop off will be no Burners.” 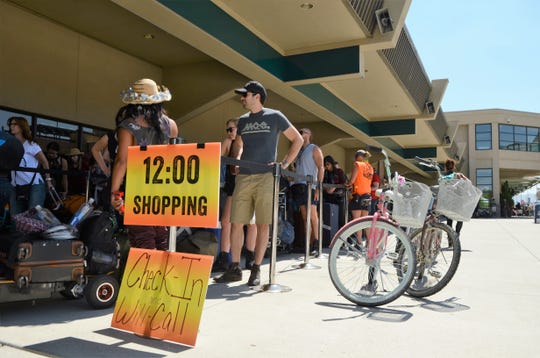 Burners wait outside the north end of the Reno-Tahoe International Airport for buses to take them to Black Rock City. (Photo: Sam Gross/RGJ)

Burning Man pumps tens of millions of dollars into the local economy every year. That’s thanks to more than 80,000 artists, entrepreneurs and bohemians who travel from all over the world to attend the event in Nevada’s Black Rock Desert.

But in April, the Burning Man Project announced its cancellation due to the COVID-19 pandemic.

Airport officials estimate that Burning Man generates about $11 million annually for them between airline ticket sales, restaurants on site and rental cars. 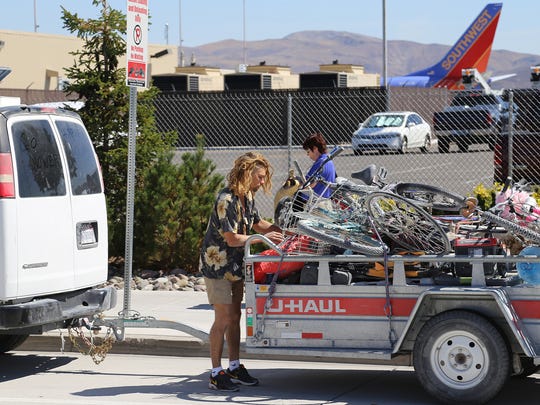 About 20,000 Burners arrive and depart from the airport each year, typically filling each inbound and outbound seats for three days before and after the event.

“It just kind of brings home again the sadness that comes along with COVID. (Burning Man) is something that brings together people of all different cultures and creeds and our country probably needs that more than ever,” Kulpin said. “The timing of it is very symbolic because as the summer ends without Burning Man, we know it is likely the harbinger of tougher times ahead.”

But as their need for food, supplies, lodging and other services, merchants became far more accepting.

Reno has likewise come to adopt Burners and their aesthetic alike by welcoming their business, their art and their principles. In years past, local business organizations have touted that they are “Burner-owned businesses” and many have hosted Burner-themed events.

Everyone from bicycle shops to grocers to hardware stores and gas stations have seen their August revenue skyrocket thanks to attendees who burn holes in their pockets as readily as they burn the Man. 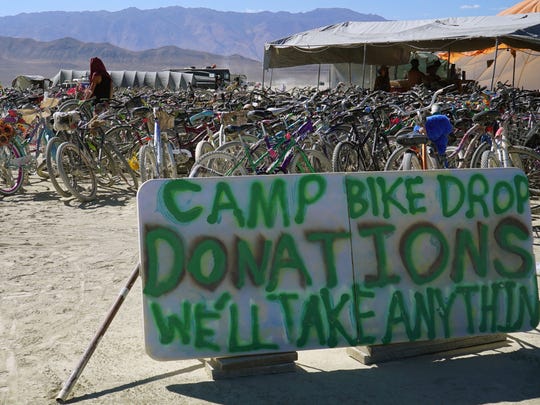 A sign at a camp in Burning Man encourages departing Burners to donate unwanted bikes, food and camping gear. Many attendees rent or borrow bikes to travel around the desert during the weeklong event, but others just buy new ones at Walmart and throw them away at the end. (Photo: Trevor Hughes/USA TODAY)

“For the past 14 years we have developed a symbiotic relationship with Burning Man, and managed to capitalize on the event to an extent that it has raised the caliber of our organization,” said Noah Chubb-Silverman, executive director of the Reno Bike Project.

Burners not only purchase bicycles for playa transportation, but often donate their bikes afterward, fueling sales later in the year for the Reno Bike Project.

Income from Burning Man sales enabled the Project to employ full-time staff, with health insurance and paid time off, Chubb-Silverman said. With the loss of revenue from reduced sales plus stunted bike part production during the pandemic, the Project expects a $150,000 budget shortfall over the next year.

In the small towns on the single route from Reno to Black Rock City, those businesses too find ways to market to the Burners, whether by making room for costume vendors and fry bread food trucks or coordinating car washes and garbage collection areas. 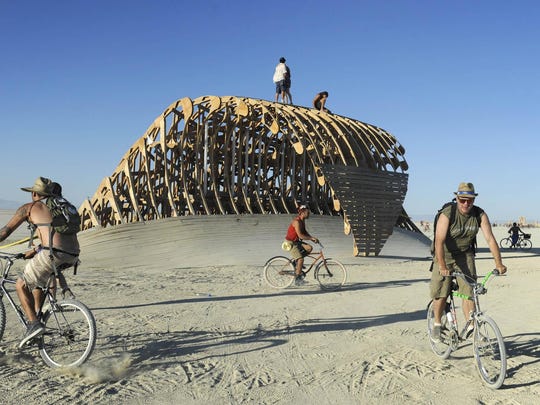 “It’s just not Burning Man, we lost the rocketeers, several motorcycle groups. We lost a lot,” said Jeff Smith of Gerlach, the town that serves as a last stop for Burners and other recreationalists. “One good thing is we have hunting season, but Burning Man is definitely the big one for us.”

Smith, a chef at Bruno’s Country Club, said by this time most years the restaurant is serving hundreds of workers and volunteers who build Black Rock City, the pop-up metropolis that is home to Burning Man.

“It’s not just us. There are other businesses that make most of their earnings from Burning Man and it keeps them open through the winter time,” Smith said. “Locals support every business in town but they can’t go every night, and there’s not much more than 100 people in town.”

Even the town of Gerlach makes money off of Burning Man by selling water to the organizers, and its school benefits from the only two things sold during the event — coffee and ice. The local Pyramid Lake Paiute Tribe also typically has contracts with the Burning Man Project. 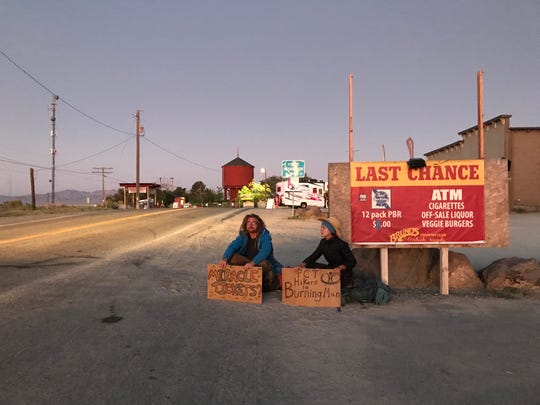 Taking care of the little guys

In recent years, a lot of Burners have skipped their outings to local storefronts and opted instead for one-stop shopping.

Monique Baron is the owner of the Melting Pot, a funky Midtown storefront known for selling furry coats, incense and LED lighting. It was one of the first supporters of Burning Man and even sold tickets from behind the counter, Baron said. 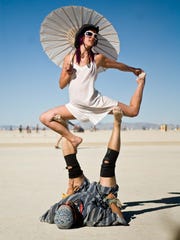 For one week out of the year, a portion of the Black Rock Desert is transformed into a thriving diverse city known as Black Rock City, the home of Burning Man. Without it this year due to COVID-19, local businesses are hurting. (Photo: Vince Alonzo/RGJ)

Online competition led to dwindling revenue from Burning Man, so the store already had been adjusting its sales before the pandemic.

“We’re balls to the wall usually in August, but it’s kind of refreshing,” said Monique Baron, owner of the Melting Pot boutique, who said she’s getting to tasks that she otherwise might not have time for. “I’m not going to lie, we’d love the revenue but you have to follow the cheese.”

Baron’s been inspired by the local support the shop has seen since the pandemic began.

“Now that we have this new norm, we can kind of step back and see what’s important, such as community and appreciating what community is and having each other’s backs and taking care of the little guys,” Baron said.

Nevada businesses already are some of the hardest hit by the coronavirus pandemic with major industries such as gaming and tourism sagging. The state reported a nearly 25 percent unemployment rate at the end of July.

There is one silver lining when it comes to Burning Man’s cancellation, according to Tim Carter, owner of Carter Bros. Ace Hardware in Reno.

For one week out of the year, a portion of the Black Rock Desert is transformed into a thriving diverse city known as Black Rock City, the home of Burning Man. The massive festival takes place on the barren remnants of Pleistocene Lake Lahontan, which is now commonly referred to as the playa. Participants hail from all across the globe, creating an environment that is a one of a kind melting pot that brings out the best in most everyone involved. Image taken between Wednesday and Thursday during Burning Man 2010. (Photo: Vince Alonzo/RGJ)

The hardware store used to see a lot of Burners stopping in for products to help set up camp, but since plug-n-play camps and luxury camping became more commonplace, his interaction with Burners has become rather minimal.

He’s optimistic that this year a small group of Burners will still go out to the playa and, instead of hitting up the big stores, they’ll go to the more intimate ones because it’s going to be the more self-sufficient individuals that make the trek this year, he thinks.

“I am looking forward to this year to see if the old school burners will come back. I wonder how many people will just show up out there,” said Carter. “It could be the best year ever.”

Jenny Kane covers arts and culture in Northern Nevada, as well as the dynamic relationship between the state and the growing Burning Man community. She also covers the state’s burgeoning cannabis industry (Check out her podcast, the Potcast, on iTunes.) Support her work in Reno by subscribing to RGJ.com right here.

The Magnificent Alfa Tipo 33 Won the World Championship in 1975 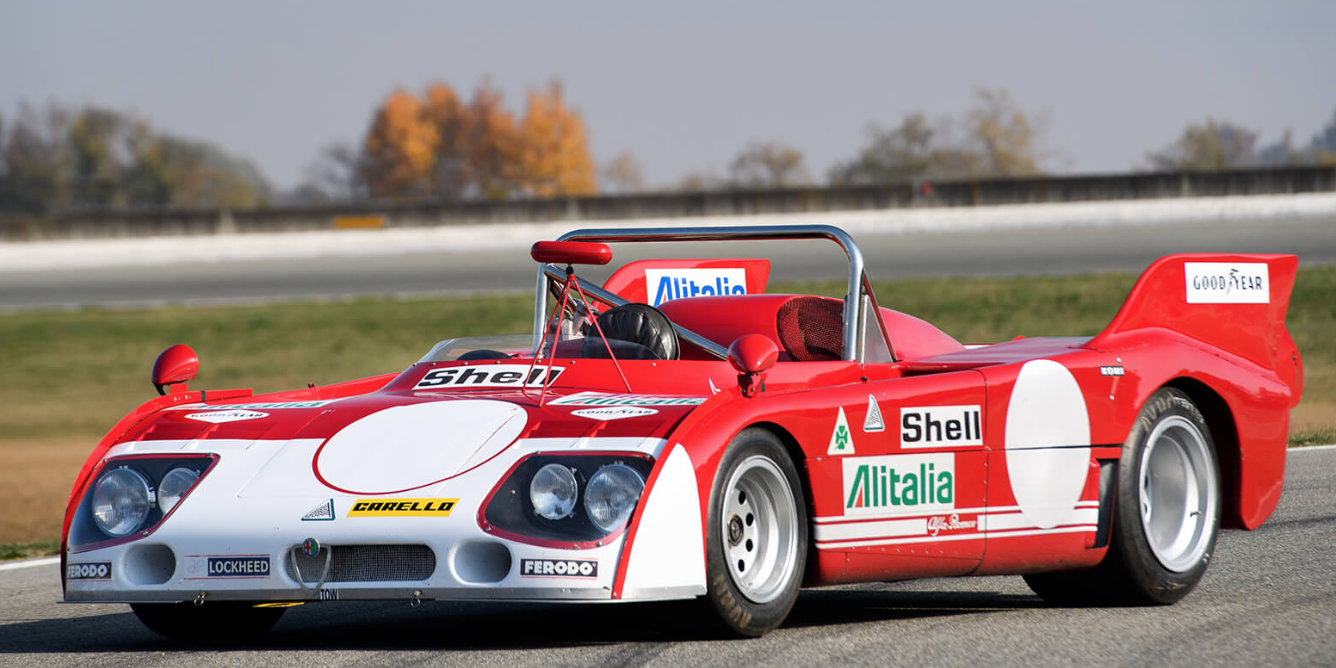