In this video, you see a cyclist testing new aerodynamic wheels from Zipp. Swapping your wheels may seem like a small change, but can make a big difference. From his tests, the rider discovers:

Before looking at power and energy, I should go over two small details.

First, how do you measure power? Cyclists can measure power by installing a small computer, called a power meter, that measures the input torque at the pedals or crankshaft and records the rotation angle at timed intervals. If you know the torque and angle, you can calculate the input energy. Dividing this energy by time gives you power.

Second, this isn’t a perfect test of aerodynamics. If you really want to examine the effect of the new wheels, you probably would have to put a bike with a dummy in a wind tunnel. When the reviewer takes his second ride, many things could have changed—wind, body position, amount of sweat on the body—and impacted performance. Let’s assume the only thing that changed was the wheels.

What happens when you ride a bike? If you are moving at a constant speed, then the net force on the bike-human system must be zero. In a slightly simplified view, I can draw the following force diagram: The vertical forces (gravity pulling down and the ground pushing up) don’t really matter here. Just forget about them and pay attention to the horizontal forces. First, let’s look at the air drag. Air acts in complicated ways when an object passes through it. But who cares when we can make a simple model of air drag force? Here’s an expression for the magnitude of this force:

In this model, the air force is proportional to the square of the bike’s speed (v). For the other terms, we have:

The second horizontal force is the frictional force. An interaction between the road and the tires propels the bike. I know what you’re thinking: Doesn’t the human propel the bike? In a sense, yes. But the reality is sort of complicated. The rider’s power goes through the pedals and chain to the wheel, which turns. But the force comes from the tire pushing against the road. So for our energy perspective on this problem let’s just say the human provides the friction force.

Clearly the faster the biker goes, the more human-push will be required. But what about energy? If I have a force pushing in the same direction as the motion of the object, then the work done (by the human) can be calculated as:

In this expression the value of s is the distance over which the bike moves. Since the frictional force must be equal in magnitude to the air resistance force, I can write the work as:

Since I really want an expression for the power I can use this work as the change in energy and divide it by some time interval Δt:

The value of s divided by Δt is the same as displacement divided by the change in time. This is the definition of average velocity. We get a power expression that doesn’t depend on the distance, just the cube of the velocity.

Got all that? Great. Let’s now apply it to the data from the video. Assuming that the wheel (and the power) was the only thing that changed, what does this say about the wheel? I will call the power required for the normal wheel P1 and the power for the aero wheel P2. The ratio will be:

With the two power values from the video of 379 and 344 watts, this puts the value of the drag coefficient for the aero wheels at 0.908 C1. That seems nice. But let’s see how much it would matter for mere mortals.

Which brings me back to the original question: Are these wheels worth it? Well, that clearly depends on how much value you put in both speed and in dollars. These wheels, which, according to a quick Google search, cost as much as $3,400, really make a difference only if you routinely achieve high speeds for long periods. If so, these wheels (or wheels like them) may provide the slight edge that brings victory. If not, you might as well save that money for candy bars.

Thu Apr 23 , 2020
Miyata Pro Restoration – Bicycle After Restoration This is a Miyata Pro in for restoration, I believe a 1984 but don’t take that as absolutely correct.  The frame had some damaged paint in a few areas and a replacement fork, a very nice replacement fork.  On inspection of the frame […] 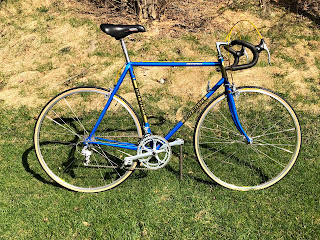