The problem is not that people don’t want to ride their bikes. In fact, these are boom times for the cycling industry.

“We are experiencing one of our best summers ever at Full Cycle,” says Spencer Burns, operations manager at the Boulder bike shop. “Consistently high sales and busy shops since May, even though stock and inventory has been really challenging. A lot of our distributors don’t have product. Or as soon as a product sells out, every other distributor dominos and sells out as well.”

Entry-level bikes are gone within days of being built. Bike tubes and water bottle holders can’t be reordered fast enough. Go for a weekend ride, or drive, and you’ll see these shiny new assets in use on Boulder County roads.

So, yes, folks are getting in the saddle and out on the road this year, sometimes in “germ pods,” as Burns says, people who ride together to limit virus exposure. But the problem for organizations that rely on many more people coming together to support road cycling — bicycle touring companies, races and advocacy groups — is that creating worthwhile communal experiences in 2020 has been rendered impossible by the pandemic.

The challenge for these groups is to figure out how to capitalize on the renewed interest in cycling, pivot operations this year and use the pandemic as an opportunity to grow the bike community and infrastructure for the future.

Organizers of the Colorado Classic — one of the largest, and most challenging women’s road cycling races in the Western Hemisphere — did all they could to hold a live event this year.

Lucy Diaz, CEO of RPM Events Group, which organizes the race, says when the reality of the pandemic hit in March, team members shifted gears to plan for a safe, COVID-defying race wherein 17 teams would compete in four stages in the high country and along the Front Range.

RPM axed spectators and expo vendors, created plans to get riders safely from the airport to lodging to the starting line, and developed health and safety guidelines for any essential personnel.

Despite all their efforts, the race participants themselves remained hesitant.

“The nature of the sport,” Diaz continues, is that the majority of riders pedal, breathe and sweat in very close proximity in the peloton (a pack of riders that travel ridiculously close together to reduce drag, and which provides a strategic jumping off point for one of a team’s riders to break away). Organizers couldn’t adapt for that, lest they choose to run four days of time trials (solo, timed races), which “wouldn’t be a great model,” Diaz says.

So the Colorado Classic did what many events have done this year: it went online. On July 29, 85 world-class cyclists joined community members in a virtual ride. The effort raised about $45,000, to be divvied among the pro racers. That’s about $30,000 less than the total prize purse at last year’s race (though you can still donate to help meet the 2019 mark at coloradoclassic.com/zwift).

Supporting the women’s side of the sport, which has fewer races, fewer opportunities for exposure and smaller prize purses, is largely why the Colorado Classic switched to a woman-only race in 2019, after holding men’s events in its first two years in existence. By virtue of hosting only a premier women’s race, and livestreaming it, as well as providing resources to cyclist to build brands, network with other businesswomen and gain followers on social media, Diaz says the Classic is hoping to help bridge the gender divide in pro cycling.

“Some of these top-tier events in Europe, the women’s side of the event, they’re competing and they don’t have TV exposure or they don’t have livestream exposure,” Diaz says. “We’re not the answer to solving the growth of women’s cycling, but we’re trying to create a model that’s best practice. That the athletes recognize is best practice and circle this event and say they want to come back.”

The hope, and plan, is to have an event next year in order to continue growing the women’s side of the sport, but Diaz says the group is learning from this year to plan for the future.

“We want to reinvent cycling in the U.S.,” she says, “so leave it to COVID to force us to do that.”

“You can only stealth camp so much”

We were somewhere in Missouri or Kansas and the community center listed on our Adventure Cycling maps as a place to get a shower was closed. Resigned to our stink, my travelling partner and I, who were halfway through the 4,200-mile TransAmerica trail, picked up our bikes to head to the city park to camp when a van swung into the empty parking lot. A woman asked us what we were doing there, we told her and she said, “Aw, come on over to my house to rinse up,” and of course we did.

It’s those little things that make a long bike tour so fruitful. But this year, anyone who hit the trails is likely to find a lot of closed community centers and other critical places for food, shelter, shower and community in the hodgepodge support network on any one of the nation’s road cycling routes.

That’s part of why Adventure Cycling, which hosts bike tours and publishes maps of several popular long-distance routes in the U.S., is “officially advising against doing distance travel” this year, says Alex Strickland, editor-in-chief of the group’s Adventure Cyclist magazine.

Campgrounds along Adventure Cycling’s route network (and everywhere else, it seems) are closed or too crowded, and for people on multi-day tours, “you can only stealth camp so much,” Strickland says.

It’s hard to estimate how many fewer people are taking long bike trips this year, Strickland says, but anecdotally, the group gets about 1,200 visitors per year at its Missoula, Montana, headquarters, which intersects with several routes, and this year there’s maybe been 50 people stop by — though there’s been a “noticeable uptick” in recent weeks.

The pandemic’s impact on potential cyclists and the communities they would have visited on Adventure Cycling routes goes two ways, Strickland says.

There’s a prime example of this in two towns along the Great Divide Trail, which runs from Jasper, British Columbia, through Colorado, all the way to the Mexican border in New Mexico. The town of Ovando, Montana, has embraced its place along the trail and transformed into a haven for riders, so much so that they’ve won hospitality awards. But with fewer people coming through, they’ve taken a financial hit this year.

Meanwhile, some 700 miles south in Colorado, there’s the Brush Mountain Lodge, which sits at a critical juncture on the trail — it’s one of the only service stops along the route for 100 miles in either direction. But the lodge decided to close this year, creating challenges for any rider who still took on the route.

“That decision really impacts riders,” Strickland says. “All of a sudden you look at this 200-mile service gap created by the lodge not being open.”

And unless you’ve had your head in a pannier for the last six months, you know that the future is uncertain for businesses across the country, particularly those in hospitality. Strickland says he’s “continually shocked” by the amount of information Adventure Cycling receives from riders about closed businesses and service stations along routes — so future riders won’t be left in the lurch out on the trail.

Strickland says map sales are steady, which he attributes to people planning adventures for next year or hoping to do some couch vacationing. The pandemic has allowed the organization to adjust some internal processes but given that folks may not be willing to take long trips even next year, the group is starting to plan shorter trips so people can “embark on bike travel and experience what that is and how it can be part of your life.”

“A local and national phenomenon”

Jack Todd, director of communications for Bicycle Colorado, a bicycling advocacy group, confirms there have been a lot more people out cycling at the local level, even if that involves having to wear a mask while riding.

“I don’t think it’s anybody’s favorite thing, but it’s a small sacrifice to make,” he says.

Todd says the group has, multiple times, been asked if bike tires can carry COVID (“The short answer is there’s no evidence that that’s the case,” he says, in case you were wondering).

But the increase in ridership, combined with a greater amount of telecommuting, presents an opportunity to expand bikeways and get more people on two wheels.

“The one thing the pandemic has really shown, especially in the early days, is just how much space is taken up by cars, and how much space streets take up in our cities,” Todd says. “It has encouraged people in a way to rethink how we use that space and who streets are really for — are they for cars or for moving people?”

Bicycle Colorado has helped pass bike-friendly legislation, but when it comes to expanding bike lanes, Todd knows as well as anyone that it can be a struggle. Take the right-sizing of Folsom Street in Boulder several years ago; though there were some flaws in the planning and execution of it, the community reaction did nothing to push bike culture forward.

“The street changed pretty dramatically and it was like it was the end of the world almost,” Todd says. “I think with enough time, people see how these changes can benefit them. Even if you’re not biking, it benefits you as a driver. Right now we do have time to show that these things work and this is an opportunity.”

Todd points to the City of Oakland as a good example of how to boldly claim streets for bicycles — in light of the pandemic, the City opened 74 miles of roadways for cyclists and pedestrians, “far and away the most in any U.S. city for people walking and biking,” Todd says.

Cycling may not be the first avenue you’d think of to advance social justice issues, but advancing that cause has been a tenet of Bicycle Colorado’s platform for a while. This moment in history has allowed the group to rethink what it means to provide “safe streets” and how to connect those in lower-income communities to bikeways and bike culture.

“The murders of George Floyd and Breonna Taylor and Ahmaud Arbery and Elijah McClain, they’ve really shown us at Bicycle Colorado the definition we’ve used for safe streets haven’t been safe for everybody,” Todd says. “I think we have been doing a lot of reflecting on how we can work for more people even while focusing on bicyclists and bike networks, and making sure we’re not doing anything to put others at risk.”

And the payoff for expanding bike ridership across all communities and making cities more bike-friendly is huge, Todd says.

“We’ve heard some really positive feedback, ‘I’ve never met these neighbors before,’ and ‘I’ve never seen my community in this way,’” he says.

Fri Aug 14 , 2020
HOUSTON – This week, Traffic Expert Anavid Reyes sat down with the City of Houston’s first Chief Transportation Planner, David Fields. Highly experienced in the transportation world with over 20 years in the industry, he started his new gig back in March, coming to us from the Bay Area. So, […] 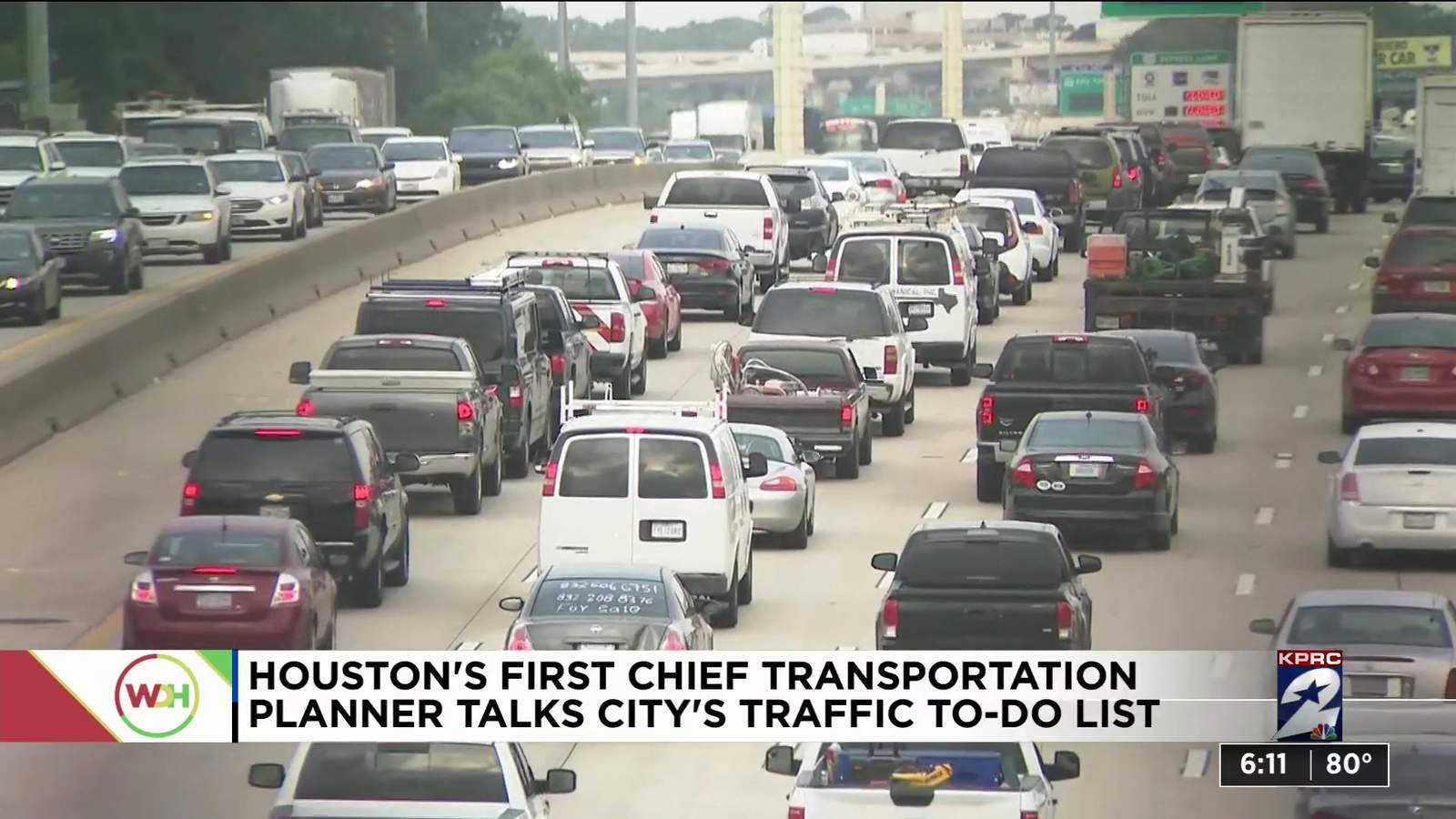