We want more people to be able to travel without contributing to climate change. Earlier this month, I wrote about how COVID-19 is a cautionary tale for climate change. There’s no doubt that we have experienced terrible suffering and economic hardship over the last several months. But as hard as it […]

We want more people to be able to travel without contributing to climate change.

Earlier this month, I wrote about how COVID-19 is a cautionary tale for climate change. There’s no doubt that we have experienced terrible suffering and economic hardship over the last several months. But as hard as it is to imagine right now when we’re still in the middle of the pandemic, climate change has the potential to be even more devastating.

The pandemic has also reminded us how much innovation is needed to prevent a climate disaster. The best numbers I have seen estimate that the economic slowdown due to COVID-19 reduced global emissions by around 8 percent. That’s not nothing, but the austerity that got us there obviously isn’t sustainable. If we’re going to address climate change, we need to find new ways to do things that don’t release greenhouse gases, including how we move around.

When most people picture what contributes to climate change, vehicles are one of the first things that come to mind. Here in the United States, transportation is the number one contributor to emissions. But you might be surprised to learn that it only contributes 16 percent of global emissions. That’s a smaller percentage than how we plug in, grow things, and make things. Still, decarbonizing how we move around is essential if we’re going to get to zero net emissions.

Our goal here isn’t necessarily to make people move around less (although we should look for ways to cut back on driving, flying, and shipping where possible). As we’ve seen over the last several months, economies suffer when people are forced to stay close to home.

We want more people and goods to be able to travel. For some of the world’s poorest people—like smallholder farmers in sub-Saharan Africa—the ability to move goods from rural areas to city markets can make the difference between life and death. To do that, we need to make sure transportation remains affordable to everyone. Products like gasoline, diesel, and even jet fuel are the standard for a reason: they can send you a long way for a low cost per gallon.

So, how exactly do we fuel our need to move around without emitting greenhouse gases? The answer is simple, even if making it happen won’t be: use clean electricity to run all the vehicles we can, and get cheap alternative fuels for everything else.

Let’s start with the former. The good news is that we’ve made lots of progress on electric vehicles, or EVs. Unlike many of the green alternatives I’ve written about before on this blog, you can go out and buy one right now if you want. The batteries that power them have seen an 85 percent price drop since 2010, so they’re getting more affordable to purchase (although they’re still more expensive than gas-based options). Plus, increased competition in the market means there are more choices available to customers than ever before, from compact sedans to sleek sports cars. You’ll even be able to buy an all-electric pick-up truck soon thanks to legacy companies like GM and Ford and new carmakers like Rivian and Bollinger.

Several companies are developing better and cheaper batteries that will hopefully make EVs a realistic option for every car owner. This video features QuantumScape, a manufacturer working to commercialize the next generation of battery technology. (I’m invested in their work both on my own and through Breakthrough Energy Ventures.)

EVs excel at short-haul travel. That means they’re great options for personal cars and even medium-duty vehicles, like city buses and garbage trucks. But even if we develop cheap, long-range EVs that are powered by zero-carbon sources, electrification isn’t an option for many types of transportation.

The problem is that batteries are big and heavy. The more weight you’re trying to move, the more batteries you need to power the vehicle. But the more batteries you use, the more weight you add—and the more power you need. Even with big breakthroughs in battery technology, electric vehicles will probably never be a practical solution for things like 18-wheelers, cargo ships, and passenger jets. Electricity works when you need to cover short distances, but we need a different solution for heavy, long-haul vehicles.

This is where cheap alternative fuels come in. There are several different kinds of these fuels, but the one you’re probably most familiar with is biofuels.

Today’s advanced biofuels are a lot different from the first-gen ones you’ve heard about, such as ethanol. Some are made from plants that aren’t grown for food, so they need little to no fertilizer (which you might remember is a big emitter of greenhouse gases). Others are made from agricultural byproducts, like corn stalks and the pulp that’s left over from making paper. Some of these fuels can even be dropped into existing engines without any modifications needed.

I’m optimistic about these biofuels, but it’s too soon to think about replacing gasoline and other fossil fuels with them. Research on advanced biofuels is still underfunded, and they aren’t ready to be deployed at the scale we need. We need a lot more innovation before they become a realistic, cost-effective option for long-haul transportation.

Another type of alternative fuel is electrofuels. By using electricity to combine the hydrogen molecules in water with the carbon in carbon dioxide, we can create a liquid fuel that works in existing engines. The carbon dioxide this process uses is captured directly from the atmosphere, so burning electrofuels doesn’t add to overall emissions. They’re very expensive, though. Depending on what fuel you’re replacing, electrofuels can cost anywhere from 3 times to 7 times as much as fossil fuels. And like with EVs, the electricity used to create them needs to be from zero-carbon sources to be a real solution.

Switching to electric vehicles and alternative fuels is the most effective way we can move toward zero emissions from the transportation sector. Although there are some other measures we can take to reduce emissions—like using less carbon-intensive materials to make cars, using fuels more efficiently, and moving around less—zeroing out all transportation emissions is going to require massive breakthroughs in these two areas.

These technologies need to get much cheaper than they are today. That means finding ways to manufacture them at scale and to make sure they perform comparably to their fossil fuel counterparts.

I’m inspired by the progress we’ve made so far, but we have a long road ahead of us (no pun intended). To prevent the worst effects of climate change, we need to get to zero net greenhouse gas emissions in every sector of the economy within 50 years. Decarbonizing how we move around is going to require lots and lots of innovation, just as in the other areas I’ve written about. I’m eager to see what role today’s technologies will play in a zero-carbon future and to discover what new breakthroughs will emerge in the years to come.

This originally appeared on gatesnotes.com.

The COVID-19 pandemic has reminded us how much innovation is needed to prevent a climate disaster.

How exactly do we fuel our need to move around without emitting greenhouse gases? The answer is simple, even if making it happen won’t be: use clean electricity to run all the vehicles we can, and get cheap alternative fuels for everything else.

Tue Aug 25 , 2020
Unlike automotive aerodynamics, motorcycle aerodynamics are highly dependent on the rider and his or her position on the bike. In competition like the FIM Superbike World Championship, aerodynamic drag can make or break a team’s success, so they need to test upgrades to confirm their benefit. BMW Motorrad Motorsport, for […] 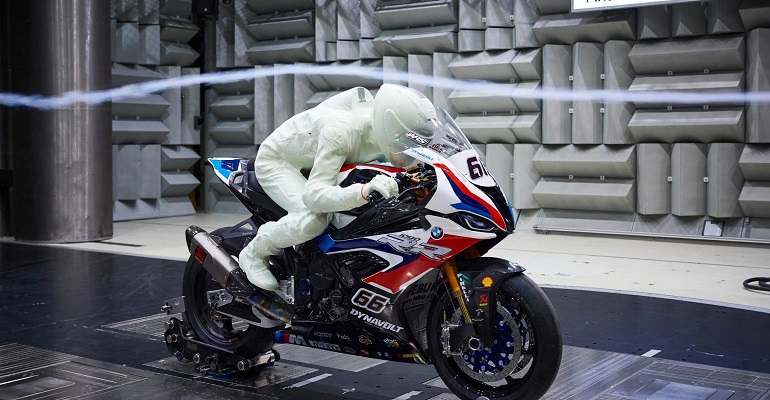